The women of Bridesmaids made a zillion dollars; can we stop asking if they're funny now? 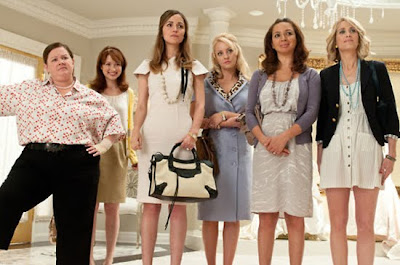 Part of the reason why some big, BS piece asking whether women are funny gets published anually is that every time a mainstream, female-driven movie that's not a traditional "rom-com" opens, we have a debate about whether anyone will turn out to see it. Surely men won't buy tickets, this apparently-real argument goes, because why would they want to watch some ladies talkin' about lady business for 90 minutes? That's a lot of weight on the shoulders of Bridesmaids co-writer/star Kristen Wiig, and the fact the film is being sold as "The Hangover for women" doesn't help in that regard.

If the bar was whether SNL star Wiig would be able to drive an R-rated comedy that non-niche audiences would find funny, she certainly clears it here. Unfortunately, Bridesmaids may not be able to overcome the inherent pressure of assembling such impressive talent, including Wiig's first script/starring role, a strong cast, director (and Freaks and Geeks creator) Paul Feig, and producer Judd Apatow.

Wiig's charming performance is strengthened by outrageous turns from Melissa McCarthy and Jon Hamm, but the loose sensibility of the screenplay, by Wiig and Annie Mumolo, often plays out more like a collection of (albeit often very funny) improv scenes than an interesting story in its own right. In that way, Bridesmaids is very much in the Apatow mold, following what's become a familiar Apatowian arc.

Still, the fact that Wiig anchors with aplomb a comedy of this size should translate into the kind of post-SNL success that your Will Fortes and Chris Kattans can only dream about. Here's hoping that her unique voice is next partnered with an equally unique project.