What did and didn't work in the Dark Knight Rises ending 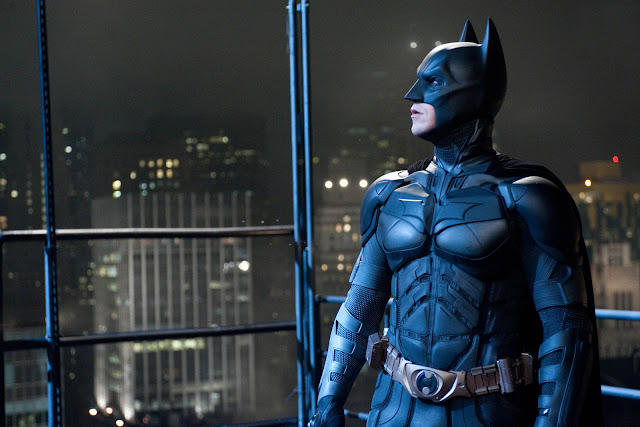 Now that Christopher Nolan's Dark Knight trilogy has hung up its cape and cowl, it's time to overanalyze the series' ending, and speculate about what might come next (because this is the Internet, and we're talking about Batman, here). The SPOILERIEST of SPOILERS ahead, folks, so take proper heed:

It's simultaneously not in keeping with the comics, and respectful of their canon
One of the biggest digs I've heard against Dark Knight Rises is that "killing off" a still-young Bruce Wayne—and presumably making someone else the new Batman—necessarily makes this not really a Batman story. I understand this argument and have some sympathy for it, but I actually think Rises, moreso than the other two films in the trilogy, pays close attention to the collective mythology of the characters, and incorporates elements from many Batman incarnations in a way that no other live-action adaptation has.

We're ok with potentially non-canon versions like Dark Knight Returns (the ending of which was lifted pretty directly for Rises's closing scenes) giving Bruce a funeral, or Batman Beyond passing the Batman mantle on to a new inhabitant, because they're stories that could happen to Bruce, y'know... later on. Rises plays with that concept by incorporating it much earlier into Bruce's timeline, but considering that it occurs in this particular series' final chapter, that makes sense.

Consider Robin
Those who weren't pleased with Bruce's fate in Rises were also generally not fans of sort-of-Robin's introduction to the series—but count me among John Blake's supporters. The way that elements of each incarnation of the Robin character throughout Batman mythology were woven into Blake's story paid homage to the canon while incorporating the general spirit of Robin into the (supposedly grounded) "Nolanverse." The construction of this Robin betrayed a careful consideration of the comics' history that wasn't always on display in the trilogy's other entries. His arc also provides the franchise with some interesting choices for its future.

A definitive ending is offered
Like many Batman fans—especially those my age—I consider Batman: The Animated Series to be pretty much the definitive onscreen depiction of the character. It managed to walk a fine line between the gothic, '30s-inspired Tim Burton Batman and the more subdued, detective-oriented history of (certain eras of) the comics. While Nolan's "serious" take in Batman Begins seemed almost too good to be true to fans who'd longed for such a live-action version, by The Dark Knight, I was wishing for a bit more of the comics' and animated series's influence. As Nolan's trilogy was about to wrap, my hope for future film entries was for them to stay in the world Nolan created, while possibly expanding a bit into the "Dark Deco" leanings of a slightly-otherworldly Gotham. But in a final act of genius, Nolan made that essentially impossible.

Rises provides a satisfying, definitive ending to the trilogy in a way that doesn't allow for a casual continuation of the Nolanverse. But it also keeps the door open enough to excite audiences about where future Batman films could go next. Filmspotting's Jonathan Larson pejoratively calls this "franchise care," but I was so pleasantly surprised by the ambiguity of the movie's ending that, to me, it seems a perfectly appropriate finale, consistent with the constantly-rolling narrative of the comics canon.

What's next?
At the same time, giving a more-conclusive ending to a franchise entry naturally takes away some of the power that comes from the continuity of the characters' history and mythology. Part of what made The Dark Knight's ending work as well as it did was its treatment of the Joker's fate. The decision to commit Joker to Arkham rather than killing him off reflected an important piece of the Batman mythos, and was summed up beautifully with the "You and I are destined to do this forever" line. (Made all the more poignant, of course, with Heath Ledger's death.) It felt right, knowing that he and Batman would be endlessly squaring off, and Rises's ending suggests a "No, they won't" conclusion.

I wish it was even more ambiguous (I've heard several people say that while it's emotionally satisfying to see Bruce and Selina kicking it in Florence, that scene might've played better just staying on Alfred's face), but I do love that something as big as the death of Batman can be open-ended enough to leave fans debating its outcome. Will Bruce return and train a young successor, as he does in Dark Knight Returns, Batman Beyond, and the Knightfall arc? Will Robin become Batman all on his own? Or maybe even Nightwing? Will Bruce decide to resurrect Batman, and team up with Robin? Will this serve as a series end, with the franchise rebooting entirely for the next chapter? It's exciting that we're left with so many possibilities.

Nolan's legacy
It's sometimes hard for me to evaluate the success of a Batman film because, honestly, I'm just as interested in seeing Batman look cool and do cool things in keeping with the history of his character as I am in seeing a great movie that Batman happens to be in. I'm much more of a Batman Begins booster than most people seem to be, not because I think it's a more successful piece of filmmaking than The Dark Knight, but because I think it's a better Batman story, one that got a live-action version of the character right for the first time. Rises continues that great Batman story from Begins, and as such, many viewers seem to be disappointed that Begins's influence is felt more heavily here than Dark Knight's. I'd argue that Dark Knight, in its bleakness, is an important second chapter in a trilogy, and seeing the complete story now, I think it works effectively as a whole.

This is a trilogy that's understood the character and history of Batman better than any previous feature adaptation, and for a fan of both Batman and well-made films, it's been a thrill to watch the story unfold. I've no clue what the franchise's next incarnation will be, although signs point to a Justice League movie, which raises its own interesting set of questions. (It seems like a terrible idea to me, but that's what I said about an Avengers movie, and that worked out pretty well.) But I'm glad that Nolan is staying on as producer, and, for all their flaws, I still kind of can't believe that these films exist. I'm excited to see what's next, but pleased that we got them at all.
Posted by John G. Potter at 4:08 PM No comments: