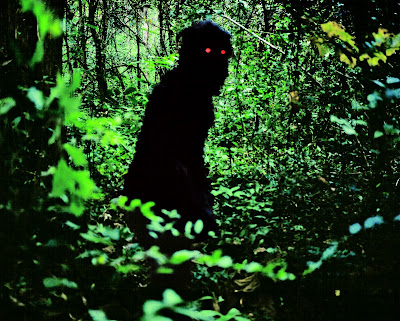 "My eyes are open, but I can't see," the titular Boonmee (Thanapat Saisaymar) says at one point in Uncle Boonmee Who Can Recall His Past Lives. "Maybe you just need time to adjust to the dark," another character responds. Viewers may similarly need some time to adjust to writer-director Apichatpong Weerasethakul's fragmented and slow, but rewarding, sixth feature. Its striking, lyrical visuals propel a hypnotic tale about the ways in which life as we know it can interact with life beyond what we understand.

Based on the book A Man Who Can Recall His Past Lives by Buddhist monk Phra Sripariyattiweti, Uncle Boonmee is the first Thai entry to win the Palme d'Or, which it did at Cannes last year. As he wrestles with his mortality, the terminally ill Boonmee encounters spirit forms of his dead wife (Natthakarn Aphaiwong) and long-missing son (Jeerasak Kulhong), while also reliving experiences from his apparent past lives.

The film is (necessarily) eerie, but also comfortable; its languid pacing allowing the plot—such as it is—to wash over the audience. In place of a score are great stretches of silence and a layer of spooky, atmospheric sounds that bolster the movie's meditative mise-en-scene. The collection of characters and interconnected vignettes that run throughout the primary story often appear random, but can't simply be dismissed as non sequiturs. Boonmee consistently grapples with big questions, but still allows for levity, establishing a natural tone that both enhances its mystical elements and occasionally threatens to bore.

Rich, often seemingly impenetrable, and always fascinating, Weerasethakul's is a singular vision whose images and mysteries stay with you long after the credits roll. Uncle Boonmee is haunting in all the right ways.

You Have Died of Dysentery: The Movie 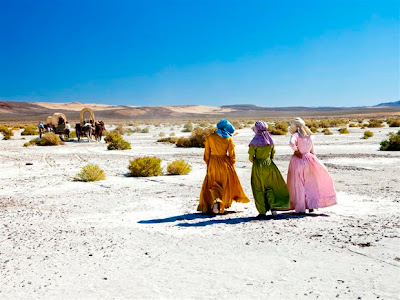 With their stories of intricate relationships framed against Oregon's harsh, beautiful terrain, 2006's Old Joy and 2008's Wendy and Lucy established writer-director Kelly Reichardt as a unique and powerful voice in American independent film. Reichardt's latest effort, Meek's Cutoff, navigates similar thematic and topographical terrain, but also manages to be her most ambitious and accomplished work to date.

Jonathan Raymond's (co-writer of Wendy and Lucy and author of the book Old Joy, which the movie adapted) screenplay is based on events surrounding the actual Meek's Cutoff, a branch off the Oregon Trail named for guide Stephen Meek, who led a group of pioneers on a harrowing trip along the route in 1845, despite his apparent unfamiliarity with the area. As the party's journey grows increasingly daunting, Meek's (chillingly played by a captivating Bruce Greenwood) motivations and abilities are questioned, especially by the headstrong Mrs. Tetherow (Michelle Williams, in a typically commanding performance). Group dynamics are further fractured when they encounter a Native American (Rod Rondeaux) whose intentions are also debated.

Initially quiet and serene, while alternately hinting at nature's brutal reality, the film is beautifully shot by Chris Blauvelt (who did camera work on the similarly striking Where the Wild Things Are, A Single Man, and Zodiac, among others) in a pale, Malickian color palette. Reichardt's camera lingers and mesmerizes, her editing rewarding viewers' patience with an earned, deliberate pace. The raw tone she achieves — reflected in Jeff Grace's appropriately sparse, haunting score — gives the proceedings an immediacy, rather than period piece stiffness, effectively capturing the settlers' eventually agonizing experience.

Meek's Cutoff is a movie about communication and understanding, a common theme for Reichardt, though writ large here. We experience events though Williams' eyes and ears, literally: POV shots of the wagon trail are often obscured by her enormous bonnet; when the men of the group discuss plans, they stand just out of earshot of the group's women, so that the viewer hears as little of these important conversations as Williams does. Greenwood often speaks in a nearly unintelligible growl of axioms and tall tales; The Indian (as the character is credited) doesn't speak English, but leaves signs on rocks that the viewer — and the settlers — don't understand. There are political allegories to be found here, if you're looking for them, but the film (and its ambiguity) succeeds without needing to strain for metaphor.

I'm as excited for Super 8, Captain America, and Harry Potter as the next nerd, but as temperatures climb and the summer blockbuster juggernaut starts to become oppressive, you may find yourself craving the sweet, character-driven relief of the art house. Thankfully, Trailer Watch is here with a few antidotes to the popcorn flick fare of this coming season.

First up, a film that's as hugely anticipated among certain segments of the moviegoing population as anything Marvel can throw at us, Terrence Malick's The Tree of Life:


Any entry from the legendary—and legendarily unprolific—writer-director is enough to garner widespread attention, but when the proceedings are this epic (much has been made of the film's dinosaur segments), expectations run high, indeed. I, for one, refuse to tamp them down. Tree of Life opens May 27, and I can't wait.


The doc, which got a warm reception when it premiered at SXSW this spring, reportedly offers a warts-and-all glimpse of O'Brien's post-NBC life and work, without making him unsympathetic (or, perhaps more important, unfunny). Can't Stop received a multi-platform distribution deal, becoming first available to AT&T U-verse subscribers before opening in theaters June 24.

Finally, the haunting Martha Marcy May Marlene, which took Best Director at Sundance:


Martha marks the feature debut for writer-director Sean Durkin, and was, interestingly—along with Vera Farmiga's Higher Ground and Kevin Smith's Red State—one of several films to deal with religious cults at Sundance this year. Also somewhat surprisingly, the thriller stars Elizabeth (sister to Mary-Kate and Ashley) Olsen in a breakout role as the titular Martha, alongside recent Oscar nominee John Hawkes, bringing that creepy warmth he so effectively employed in Winter's Bone. Very eager to check out this one, which opens July 10.

Well, these ought to adequately cleanse your palette from all the 'splosions of the multiplex. Which movies have you ready for summer?
Posted by John G. Potter at 3:49 PM 2 comments:

Today's the last day that Chicagoans can catch a screening of Danny Boyle's thrilling Frankenstein, which recently ended its sold out run at London's National Theatre. The play is currently on a broadcast tour of movie theaters around the world, including local treasure the Music Box.

Frankenstein, fairly closely adapted by Nick Dear from Shelley's novel, marks a return to the stage for Boyle, who began his career in English theater before attaining the "celebrated filmmaker" status he now deservedly enjoys. The show stars Boyle's Trainspotting cast member, Jonny Lee Miller, and Benedict Cumberbatch, who has the distinctions of both playing the BBC Sherlock series' titular hero, and being hilariously, Britishly named.

In a stunt that initially seems gimmicky, Miller and Cumberbatch alternate roles as both Frankenstein and his monster, delivering powerful performances that ultimately accentuate the story's themes of duality and creation. Naomie Harris (28 Days Later, Pirates of the Caribbean) and George Harris (Harry Potter) co-star.

Unsurprisingly, Boyle mounts a visually dazzling production, propelled by a driving soundtrack from UK electronic duo Underworld (who also scored Boyle's Sunshine and provided songs for Trainspotting). But appropriately, the show's chief takeaway is its moving story, as relevant now as it was nearly 200 years ago — probably more so.