This week in Chicago fun 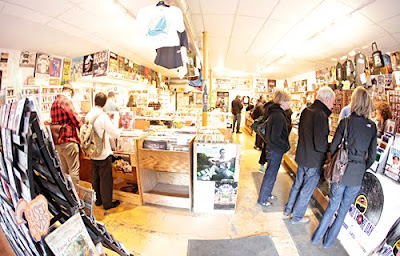 Now that Marine One has taken POTUS out of fair city (and the warm embrace of Mayor-elect Emanuel), Chicagoans may find themselves seeking other local distractions. Well, look no further, friends: On Tape's Friday Fun Time Round-Up is here to show you what's what!
Chi City's own psychedelic rockers The Clams headline at Quencher's tonight, with openers The Deloreans (out of Louisville) and fellow locals House Sounds. You can also catch The Clams on Monday, opening for This Is Cinema at hipster haven The Whistler's free CHIRP Night – bar proceeds for which will benefit the Chicago Independent Radio Project.
Tomorrow brings the fourth annual Record Store Day, with plenty of local stores participating. Expect in-store performances, giveaways, sales, and rare/specialty releases to be featured. Hooray for vinyl!
Also on Monday, Bill Tucker brings his brand of Chicago folk rock to Panchos, along with other locals Warehouse City, Transmontane, and headliners Secret Cities. Pick up Tucker's latest LP, the great Mythological Creatures, at Reformer Records.
Finally, Northwestern University will host "Illuminating the Shadows: Film Criticism in Focus," a free conference on the state of film criticism, from Thursday, April 21 to Saturday, April 23. The conference's screenings and panel discussions will focus on the history of film criticism, the role of the film critic, and how those traditions connect to the current questions surrounding criticism (print vs. online, blogger vs. professional, etc).
Among the conference's many respected speakers are the Chicago Tribune's Michael Phillips, the New York Times's Dave Kehr, the Chicago Reader's Jonathan Rosenbaum, NPR's Wesley Morris and Alison Cuddy, The A.V. Club's Scott Tobias, and Ebert Presents At the Movies co-host Ignatiy Vishnevetsky. Should be interesting.
Posted by John G. Potter at 12:30 PM

Nice. Apart from his music, I always liked him on the show "Undeclared."