The Dude meets The Duke 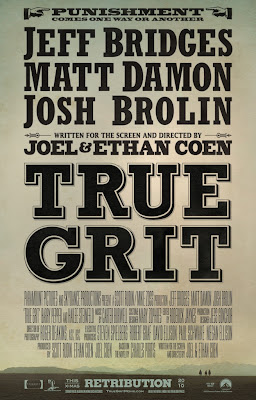 With dreck like Little Fockers dominating the box office, it feels good to be able to say that the Coen Brothers are currently enjoying, by far, their biggest commercial success. A number of factors have likely led to True Grit's considerable ticket sales, but the fact that it's easily one of the writer/director/producer duo's most "mainstream" films is probably a significant contributor.

Based on Charles Portis's 1968 novel of the same name, True Grit is Joel and Ethan Coen's second adaptation, following their 2007 Best Picture winner (and second biggest hit), No Country for Old Men, and their first attempt at a straight-ahead Western. As we've come to expect from the brothers, it's beautifully shot by regular collaborator Roger Deakins, compositionally elegant, and at times, a bit strange. However — though I suspect this is due to its source material more than anything else — the movie could stand for some more of that signature Coen weirdness.

Like the rest of the duo's work, the picture is violent (how this is rated "PG-13" while The King's Speech gets an "R" is beyond me), funny, and poignant, with dialogue that pops and flows poetically in antiquated Old West language. But its striking visuals — like that of an approaching, bearskin-wearing medicine man who initially appears to be a bear on horseback — are sometimes overshadowed by surprisingly non-off-kilter (on-kilter?) tropes like the obvious music cues and voiceover.

The story concerns hardheaded 14-year-old Mattie Ross (Hailee Steinfeld), who enlists the aid of crusty US Marshal Rooster Cogburn (Jeff Bridges) to track down Tom Chaney (Josh Brolin), the outlaw who killed her father. Cocky Texas Ranger LaBoeuf (Matt Damon) is already on Chaney's trail, and the three will have to work together to find their man. Naturally, there are several setpiece obstacles along the way. The proceedings are anchored by the supremely confident, charismatic performance from newcomer Steinfeld. She more than holds her own with Bridges, who exudes screen presence in the role that earned John Wayne an Oscar for Henry Hathaway's 1969 adaptation.

The disappointing ending's lack of heft and the absence of a deeper Coen imprint on the material keep True Grit from becoming an instant classic in the manner of some of their other work. Regardless, this is strong filmmaking from artists who have long since earned the right to make whatever kind of movies they desire.

"On kilter" is my new favorite descriptor.

Use it in a sentence today.