"Craziest Movie Ever to Potentially Sweep the Oscars" Award winner 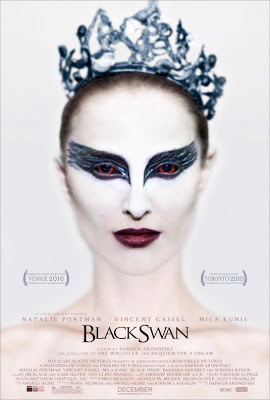 Those of us who recognized an assured cinematic talent in Darren Aronofsky but found his work (Pi, Requiem for a Dream, The Fountain) to be a bit overblown were pleasantly surprised by the restraint he brought to 2008's The Wrestler, the director's much lauded, decidedly unflashy portrait of an aging former wrestling star. Aronofsky's fifth film, Black Swan, exists somewhere in the middle of that tonal spectrum; it's a hyper-real fairy tale superimposed onto a setting of grounded realism. In that sense — as well as others — Roman Polanski was a clear influence on Black Swan: intense and disturbing, the story centers on its female protagonist's growing, sexualized paranoia in a way that immediately calls to mind Rosemary's Baby and Repulsion.

Natalie Portman stars as tightly wound ballerina Nina Sayers, who lives with her overbearing mother (Barbara Hershey), and is chosen to replace outgoing principal dancer Beth (Winona Ryder) in her company's "re-imagined" production of Swan Lake. Under the direction of the highly regarded Thomas (Vincent Cassel), Nina excels in the technically proficient "White Swan" aspect of the Swan Queen role, but struggles with the passionate "Black Swan" side, which new, carefree dancer Lily (Mila Kunis) performs naturally. As Nina delves deeper into the demanding part, so too does she increasingly fall into a psychosis that threatens to devour her.

Debut screenwriters Andres Heinz, John McLaughlin, and Mark Heyman (who worked on the original, second, and final iterations of the script, respectively) craft dialogue that's sometimes stilted and obvious, often delivered by conventional character types, but identifying those traits as flaws misses the point. The film explicitly suggests its folk tale inspiration by using Swan Lake as a backdrop, and does so implicitly through the sensual assault it steadily builds to. The immersive sound design, double-take editing, and close, handheld shots that Aronofsky employs cause the audience to believe that what we're seeing isn't quite real. Spending so much time with Nina (Portman is in every scene) allows us to experience the world as she does, and it's often through the lens of fantasy, for better or for worse.

Black Swan hinges on Portman's abilities as much as its dazzling visuals, and she gives a completely engrossing performance here, with a physicality and range only hinted at in prior work. (Similarly, Kunis shows that given the right material, she has a natural, easygoing charm.) The story's initial groundedness comes from its exploration of the disciplined, difficult world of ballet, and as Nina becomes consumed by it, so do we. Aronofsky uses Tchaikovsky's score (and Benjamin Millepied's choreography) to great effect, with it ultimately taking over the picture as Nina is overtaken.

As with one of my other favorites of the year, Shutter Island, this is ostensibly a horror movie whose twists and turns aren't exactly surprising — but the way in which they're presented is. A true filmic feast, Black Swan is striking in its depiction of a tortured artist becoming unhinged in the name of creative perfection.