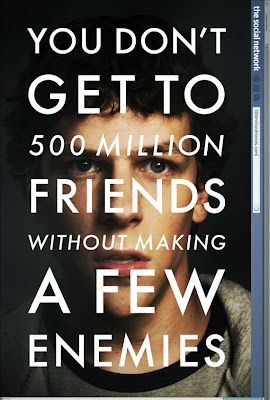 On the surface level, a "Facebook movie" has, of course, no good reason to be entertaining. And an account of the (very recent) history of a website's founding and subsequent litigious troubles should certainly have no right to be exciting. But if anyone could pull it off, many reasoned before seeing the film, it's Aaron Sorkin and David Fincher. Happily, and not unsurprisingly, they were right.
The Social Network, adapted by Sorkin from a treatment for 2009's The Accidental Billionaires, follows Facebook founder Mark Zuckerberg's unprecedented rise to power, and the personal connections he sacrificed along the way. It's a familiar premise, but its context feels fresh and engaging. The backroom drama and contemporary implications of Facebook's story are a perfect match for Sorkin, whose crackling dialogue is served exceptionally well by Fincher's brisk pace. The director brings his controlled, dark finesse to the material, and the combined results make for truly compelling drama.

As Zuckerberg, Jesse Eisenberg carries the movie with an understated performance that both propels its swift storytelling and effectively holds the screen (with help from strong turns by Justin Timberlake, Andrew Garfield, and Armie Hammer). In what could be a theme for the films of 2010, the Zuckerberg of The Social Network may not be entirely "true," but he's a nuanced character for whom Eisenberg manages to have the viewer rooting, while also keeping them at arm's length. Buoyed by its muted color palette and intense, foreboding score (by Trent Reznor and Atticus Ross), the picture can feel cold and calculating — but no more so than its subject.
Plenty of interesting questions — about ambition, status, friendship, and technology — are raised in The Social Network, but its strength lies in letting us draw our own conclusions. We may not know which version of events is factual, but we know that there's truth in Zuckerberg's story, and in what his creation offers people.
Grade: A-
Posted by John G. Potter at 2:55 PM