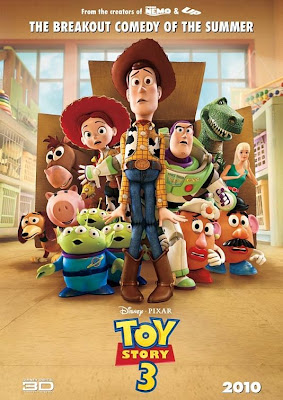 After eleven consecutive commercial and critical smashes, I'm tempted to ask, "What's in the water over at Pixar?" I suspect, though, that the answer would simply be that the studio provides creative filmmakers with an atmosphere that rewards and encourages honest, unique, and imaginative storytelling, able to resonate with people of all ages and walks of life. Still, it's sometimes difficult to believe that the company doesn't rely on some kind of foolproof equation they've developed which allows them to effectively manipulate a wide range of audience emotions with the slightest of ease.

Case in point, Toy Story 3. When news of the film's release first broke, there was some disappointment among Pixar fans that the studio was "settling" for a second sequel to an already established property, rather than announcing a new, original story. It's a (fairly unsurprising) relief, then, that from its opening scene, the movie is immediately funny, touching, and exciting, and that those feelings don't let up, even through the end credits. Four years passed between Toy Story 2 and the original; TS3 arrives eleven years after the second entry. While that gap could be seen as further fodder for the argument that the picture was greenlighted purely for its financial potential, director Lee Unkrich (co-director of TS2, Finding Nemo, and Monsters, Inc.) uses that lapse in time to provide a solid reason for revisiting Sheriff Woody, Buzz Lightyear, and the gang.

In the kind of "emotional time passage" montage at which Pixar has become so adept, TS3 opens with home video clips of toy owner Andy growing up, from the days of the first two movies, to the present, which finds him preparing to leave for college. Naturally, this change inspires panic and melancholy among the toy ranks, lead by Woody and Buzz, who've had to go to increasing lengths to get the teenaged Andy to acknowledge, much less play with, them. The inherent sadness in the idea that our playthings are secretly alive has been felt throughout the series, but screenwriter Michael Arndt (Little Miss Sunshine) brings it to new depths here by having the toys face such a crisis of identity and purpose. Pretty brave stuff for summer family fare, but it's consistent with the studio's track record of rewarding risk taking.

What ensues is the expected Toy Story setup of elaborate near escapes and rescue plots, fraught with peril and humor - propelled of course, by fantastic animation, the best of the three on display here - but this time around, a weighty sense of existential (and tangible) angst pervades the setpieces. Each of the trilogy's films deal with questions of friendship and loss, but Toy Story 3 is the most emotionally engaging, and ultimately, the most powerful, of them. Improbably, Pixar has crafted a movie series in which each entry is more effective than the last.

Agreed. As Jack Black said at the Oscars, "What I do to make money is do voiceovers for Dreamworks and then bet all of that money on Pixar to win the Oscar."