The Girl Whose Titles Were Long 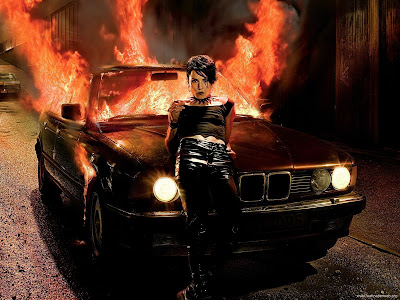 We've been talking a lot about sequels around here lately, leading me to make a comparison I wouldn't have expected, prior to seeing The Girl Who Played with Fire: the second chapter in the gritty Millennium trilogy - adapted from the late Stieg Larsson's novels – has, on a surface level, some key components in common with this summer's much bigger follow-up, Iron Man 2. Both are transitional entries in popular franchises; both tend to favor action setpieces and multiple plot lines over the more subtle storytelling of their originals, and as a result, aren't as engaging or taut as their predecessors (not an uncommon criticism of sequels). Still, Fire is a solid, enjoyable film - another characteristic it shares with IM2.

Slightly more conventionally helmed by director Daniel Alfredson than The Girl with the Dragon Tattoo's Niels Arden Oplev, the movie wastes no time launching into muckraking protagonist Mikael Blomkvist's (Michael Nyqvist) next adventure; those who haven't seen Dragon will be lost. As with the last film, which had Blomkvist investigating a decades-old series of unsolved Swedish murders, he is assisted in his latest case by punky private investigator/hacker, Lisbeth Salander (Noomi Rapace), the real star of the series. This time, the pair becomes embroiled in a human trafficking chase, leading Salander to confront some of her past's secrets.

While Fire is a much more expository narrative than Dragon, Salander remains a compelling, badass character (rooted in Rapace's commanding performance), and the story provides an opportunity for viewers to learn more about her background. The movie retains the series' clear Silence of the Lambs imprint, but manages to feel just as influenced by the derring-do of the Bourne franchise. This blending can be by turns effective and disjointed, intertwining twisty and complicated plot elements. (Perhaps the inevitable American adaptations - the first of which arrives next year from, promisingly, David Fincher - will provide a more realized offering?)

Jonas Frykberg's - who returns as co-writer for the threequel - script may close with an unsatisfying ending, but only because it's an obvious setup for The Girl Who Kicked the Hornet's Nest (arriving stateside in October); it's a testament to the absorbing universe created by Larsson, and strikingly adapted by Alfredson and Oplev, that we immediately want to know what happens next. The Millennium trilogy's core elements may be fairly standard crime procedural material, but its unique perspective is original enough to excitingly propel the series.