2x better than most action sequels 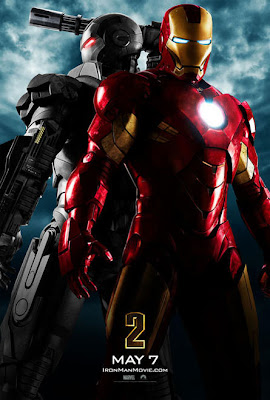 When it hit screens two summers ago, Iron Man surpassed audience expectations by delivering that rare treat: a superhero flick stressing character over explosions. While the strength of the original film lay in its emphasis on thoughtfulness over stock archetypes and CGI sequences (while still delivering the action goods), fans can rest assured that, for the most part, the series' integrity remains unscathed by Iron Man 2.

Vanko and Hammer — each variations on aspects of Stark's character, and both with a vendetta against him — provide the bulk of the story's conflict, but Stark is also facing problems with the federal government, which pressures Stark to turn his technology over to the military; his company, which Gwyneth Paltrow's Pepper Potts takes over as CEO; and another government agency, the shadowy S.H.I.E.L.D., which we learn more about this time around. If that sounds like a lot of plot elements, it is, but the screenplay (by Tropic Thunder scribe/actor Justin Theroux) largely succeeds where other sequels haven't, by juggling multiple storylines while keeping the characters empathetic and three-dimensional.

Often, second superhero movie entries allow a series to become less restrained by its origin story, the elaborate mythology of which can typically hamper a first movie's compactness. Iron Man's origin unfolded so effectively, however, that the franchise is actually threatened with that problem in its sequel. But while IM2's structure isn't as tight and streamlined as the original, the film still chugs along fluidly — even if the proceedings aren't exactly inspired.

It's a true "part two," in that the picture tells a transitional story — not a bad thing, if done well. Marvel Studios uses IM2 as its most overt platform yet to set up a likely Avengers series, which initially seemed like a terrible idea (some things are best left on the comic page), but the movie convinces that the plan, while a bit messy, is at least thought out, and has potential to be done justice.

Ultimately, for what it is, the film succeeds simply by being a sequel that doesn't feel unncessary; it's a solid second chapter that takes Tony Stark to the next logical place in the series. (Here's hoping the inenvitable threequel finds further inspriation in the comics' landmark Demon in a Bottle arc, which focused on Stark's growing alcoholism.) It's exciting to see Marvel — whose first release was Iron Man — defy conventional wisdom by aiming to not just let each picture stand on its own, but cross-pollinating them with each other's characters, and attempting to set up a real comic book world on film. Iron Man 2 is loud and busy, to be sure, but far from brainless. It manages to retain enough of the heart, message, and fun that made the original special.