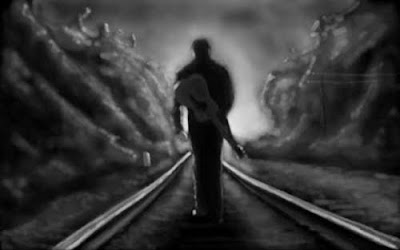 The newly released video for Johnny Cash's "Ain't No Grave" - the first single, and easily the strongest track, off of Cash's posthumous record of the same name - may have been directed by Chris Milk, but Milk shares a co-directing credit with 5,500 other people.

The clip employed an open source ("crowdsourced") development method, one which bands like Radiohead have also used, to interesting effect. Fans were invited to submit online drawings - via The Johnny Cash Project website - based on provided stills from the Man in Black's 1973 film, The Gospel Road (the story of Jesus, told Cash-style...which I, a diehard fan myself, can really only recommend to those who would classify themselves as such). The drawings were then compiled, creating a compelling piece for an artist who knew a thing or two about powerful videos.
.
The video is completed, but you can still make some fun drawings. Do so, and watch the final product, here.