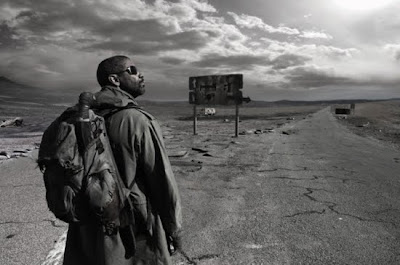 After the remarkable commercial success of The Passion of the Christ, a consensus formed in Hollywood that the floodgates would be opened for movies with religious subjects to dominate the box office. While that hasn’t exactly been the case, it is perhaps true that The Passion helped to make a project like The Book of Eli, with its both explicitly violent and explicitly Christian elements—as opposed to the implicit themes of, say, the Matrix trilogy—more viable.

The Passion may have proven inimitable, but the fact that an original screenplay almost entirely about (mild spoiler alert!) the Bible can get developed by a major studio at all, let alone star Denzel Washington as a sermonizing, samurai sword-wielding drifter, would likely have been impossible ten years ago. Getting audiences to shell out for the titillating mixture of the sacred and profane is certainly nothing new (just ask Dan Brown), but rarely have blockbusters been this overtly evangelical.

As is typical for the talented, uneven directors, the Hughes Brothers (who started in music videos before helming features Menace II Society and From Hell, among others), the film offers immediately striking visuals of a muted, post-apocalyptic wasteland, backed by a compelling score and sound effects. The visceral beauty of Eli’s (Washington, in an expectedly commanding performance) world—hunting, scavenging, traveling alone—as presented by the Hughes Brothers, is undeniable, but it’s difficult to shake the feeling that the audience has already seen the same end-of-the-world scenario plenty of times.

We learn that the world is suffering the effects of a nuclear world war, which caused the sun to explode…or something along those lines. Society has collapsed; rogue gangs roam vast stretches of unused highway; resources are scarce. It’s a good thing, then, that Eli, perpetually walking west (in search of what, we’re not initially sure), is capable of Kill Bill levels of stylized ultra-violence, which he uses to dispatch the thugs who inevitably seek him out. In a classic Western movie trope, he repeatedly offers, “I don’t want any trouble,” before carrying out a self-defense massacre.

Eventually, Eli reaches a small town, which a creepy intellectual named Carnegie (Gary Oldman, charismatic as always) organizes and lords over, demanding that henchmen pillage the surrounding areas, in search of books. The printed word has largely disappeared, and Carnegie believes that if he can obtain the information found in one particular book—guess which one—he will be granted unparalleled power.

Here, the story takes a turn for what could be considered a fundamentalist warning/fantasy. It is revealed that religion was the cause of the war, and consequently, survivors were forced to burn all copies of the Bible. Eli, however, has a copy in his possession, and stops at nothing to protect it, hiding it from everyone—further raising some dubious “Christian” virtues—with the exception of Solara (the wooden Mila Kunis), a town resident whom Eli reluctantly agrees to bring on his journey.

When Carnegie learns of Eli’s copy, he demands that it be handed over. “That book is meant to be shared,” Carnegie reasons. Eli refuses, and naturally, takes out a small army of attackers, wounding Carnegie, on his way out of town. “I haven’t found the right place for it yet,” Eli says of his Bible. Is the moral, then, that Christ is a selective messiah, or that some are unworthy of hearing his message?

Eli and Solara make their way west, and when she questions his methods, he claims that he feels called to travel in that direction. The idea here is to extol faith, over physical evidence, as a virtue, but the sentiment of hearing a voice that tells one to do things (including killing those who get in your way) is too close to “fundamentalist terrorist” for comfort.

The very aspects that I find baffling about The Book of Eli, though, are the same that endear me to it: who exactly is the intended audience? Its over-the-top violence will likely deter it from megachurch screenings; its preachiness may prevent it from taking a hold in the action flick pantheon; the slow pace of its Western film influence could keep the multiplex crowds antsy. It’s a strange picture (e.g., Tom Waits has an extended cameo), and for a popcorn movie, that’s admirable.

Still, this is screenwriter/former video game writer Gary Whitta’s first script, and it shows. It may be a unique take on a familiar story, but it’s still populated with stock characters (the villain; the damsel; the seemingly invincible hero), and its plot device is a little contrived. Like a proselytizing comic book, or church drama aiming for edginess, the parable can wear thin.

Questionable theology notwithstanding, The Book of Eli has enough interesting ideas and exciting set pieces to make it a worthwhile experience. Its ultimate message even manages to resonate when Eli gets it right by the third act: “I got so caught up in keeping it safe,” he says of his book, “that I forgot to live out what I learned from it. ‘Do for others what you do for yourself.’” 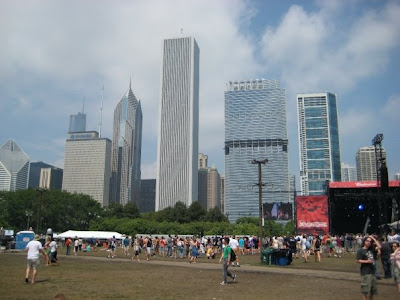 Well, my dawgs, it's that time of year again: birds are chirping, spring training is well underway, and music festival lineups are about to be unleashed on the clamoring masses. Here's the rundown for what Chicago can expect...

Lollapalooza's headliners are widely rumored to be in place, featuring, as usual, plenty of acts to scratch the nostalgia itch, including Green Day, a reunited Soundgarden, and even The Strokes...all of which sounds fine, if considerably less exhilarating than it would've, say, five to ten years ago. The real standouts will be Lady Gaga — a somewhat unusual choice, given Lolla's reputation as a tribute to "alternative rock" — and Arcade Fire, who would likely provide my (and, I suspect, many others') only reason to fork over the considerable entry fee, even if I'd prefer the intimacy of a theater as a venue. Flaming Lips, MGMT, Phoenix, Yeasayer, and Dirty Projectors are other names being bandied about as potential performers. The official lineup will be announced in early April.
Meanwhile, Pitchfork, generally considered Lolla's cheaper, hipper alternative, boasts an impressive '90s-era reunion of its own in headliner Pavement, likely the reason that three-day passes to the fest are already sold out (tickets went on sale last month). Co-headliners Modest Mouse and LCD Soundsystem round out the impressive bill, but, as with the Lollapalooza lineup, they just don't stir my excitement the way they might've a few summers ago. Even with solid backers Broken Social Scene, El-P, Panda Bear, Jon Spencer Blues Explosion, and St. Vincent, I just don't think I'm sold. This could, of course, have less to do with the lineups themselves than with me progressively inching out of my 20s; as much as I love music outdoors, "summer festival" is becoming increasingly synonymous with "hot, tiring, and painful," for me.
Which is why, lame as it might sound, I may actually be most excited about the Ravinia Festival this summer. With Steve Martin (performing from last year's stellar bluegrass record, The Crow), The Swell Season, and Buena Vista Social Club among this year's acts, you can't beat lying on a picnic blanket — and enjoying the food and drinks you can bring in from home — while rocking out. And the Downtown Sound: New Music Mondays series in Millennium Park (featuring She & Him, Kid Sister, and The Thermals, among others) has the added bonus of being free. Woo, grownup summer!
Posted by John G. Potter at 11:35 AM No comments: 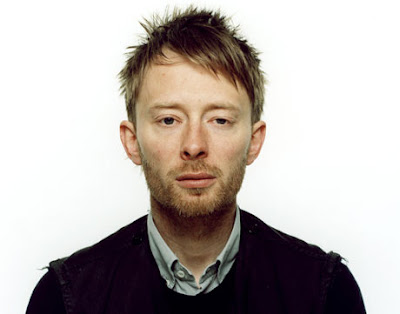 Radiohead frontman Thom Yorke will hit the states next month for a mini-tour with his newly named side project, Atoms for Peace.

The band, featuring Flea, much lauded producer Nigel Godrich, and Beck drummer Joey Waronker, was assembled for Yorke's Eraser tour, and the shows will likely heavily feature songs from that excellent solo album, along with a few new jams (and a couple Radiohead tunes, for good measure).
Atoms for Peace play Chicago's Aragon with opener Flying Lotus on April 10 and 11. I, for one, would actually be grateful for the opportunity to see Mr. Yorke indoors...
.
Speaking of Radiohead, everybody see this great re-edit of Jay Leno's new promo? Its soundtrack change is much more appropriate: