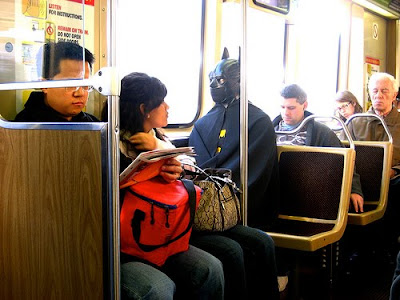 Speaking of Spider-Man...while the climactic battle atop an elevated subway train in Spider-Man 2 was an exciting one, as a Chicagoan, it's always bothered me a bit that the scene was clearly shot in downtown Chicago, but meant to be New York. (And any New Yorker could tell the same thing, since there aren't any elevated trains in midtown Manhattan.)

With that employment of artistic license in mind, check out Red Eye's list of CTA movie goofs. The city may have already fallen from the dizzying highs of serving as backdrop for The Dark Knight to the mediocre lows of reportedly doing the same for Transformers 3, but it's seen its share of iconic movie set pieces over the years, with the El often playing a starring role. So, what other glaring, public transportation-based filmic mistakes have gotten your goat, friends?
.
UPDATE: Batman on Film reports that the new Dark Knight installment is rumored to already be scouting locations in Chicago...