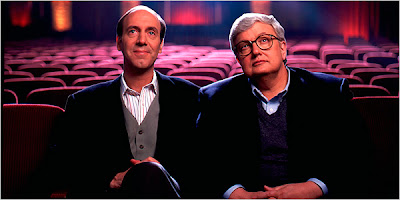 Chris Jones has a terrific piece on Roger Ebert in next month's Esquire, which serves as an effective reminder of just what a gift Ebert's work has been—and continues to be—to the critical community.

Ebert, who lost most of his lower jaw to complications from salivary cancer surgery in 2006, is no longer able to speak, but is perhaps a more prolific writer than ever before, maintaining his Sun-Times column and a widely-read personal blog. Jones's article sheds light on the ways in which the iconic film critic's life has changed, negatively and positively, in the last few years.

I grew up watching Siskel and Ebert, and devouring the latter's collected essays, unusually thoughtful for "mainstream" film reviews (there's a reason that he was the first movie critic to win a Pulitzer). I've always loved writing, reading, and cinema—as well as writing and reading about cinema—and it's nearly impossible to not be inspired by Ebert's passion for the same.
Posted by John G. Potter at 5:30 PM

I had no idea the extent to which Roger Ebert had been ill. I just read his review for Avatar and would agree that his writing/insights seem unaffected;he seems to be writing with a refreshing sense of attention to detail, nuance, etc. He is the final word for me as I crash through opinions. I also had no idea he was such an anglo-file. Press on, Mr. Ebert. You are an inspiration!