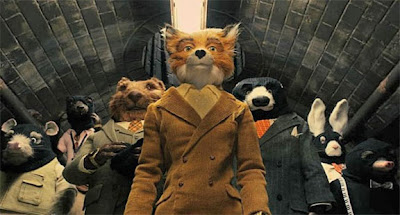 A couple of years ago, upon hearing about Wes Anderson's new project, I speculated that a stop-motion-animated adaptation of a children's novel might be just the change of pace the director needed to break out of his "Andersonian" box. While the cluttered trailer didn't convince me of this fact, the film itself certainly did: living up to its title, Fantastic Mr. Fox is easily Anderson's strongest since The Royal Tenenbaums.

The best thing about the movies Anderson made in the interim, The Life Aquatic and The Darjeeling Limited, was that they clearly showed that the director was interested in exploring new territory, even if the films were ultimately too derivative of his own work to effectively convey their intended effect. Mr. Fox joyfully melds the sensibilities of Roald Dahl, the book's author, with Anderson's own, and the breezy result isn't suffocated in the same stylistically overbearing way that his recent entries have been.

While the combination of Wes Anderson and stop-motion may initially seem a little jarring, it actually makes perfect sense: the painstaking method allows for the ultimate in composition control, and is tailor-made for the filmmaker's meticulous, storybook style. While some controversy has surrounded the director's alleged level of involvement in the film, whatever the process was, the product is unmistakably Andersonian. It's worth noting that there aren't a ton of people who can do stop-motion on a large scale, so tensions between animation experts and traditional directors are bound to surface (there's a reason Tim Burton co-directed Corpse Bride). Anderson doesn't share a "directed by" credit with animation director Mark Gustafson, but the movie is light years ahead of Eddie Murphy's stop-motion series, The PJs, for which Gustafson served as supervising director.

In any case, Mr. Fox employs a rough-hewn, ingratiating aesthetic that compliments Anderson's quirky characters, dialogue, and timing surprisingly well. Visually, the movie is more "Rankin/Bass Christmas special" than Coraline; tonally, its closest cousin might be Wallace & Gromit - which is certainly not a bad thing.

The film's tale of a fox-led crew of ragtatg outlaws is also slightly remniscent of the animated Robin Hood (which, while not Disney's best, was nonetheless my favorite growing up) - a suspicion confirmed by one scene's use of the Robin Hood soundtrack as score, and another featuring a mocking campfire folk song, led by Jarvis Cocker (who provides a voice and some of the score). The movie's winsome energy is infectious, and by the point in the story that the titular Mr. Fox (George Clooney) has risked the safety of his family and friends by reverting to his repressed, chicken-thieving ways, we're genuinely drawn into the characters' underground world.

Anderson and Noah Baumbach (Squid and the Whale writer-director/Life Aquatic co-writer) build on Dahl's bare bones narrative - about a cunning fox who steals from three nasty farmers - by crafting a script that, like so many great kids' stories, hinges on themes of family, identity, and purpose. It's clever and ocassionally touching, but mostly, it's filled with enjoyably offbeat humor.

Fantastic Mr. Fox doesn't resonate emotionally in the same way that some of this year's other family films have (Up, Where the Wild Things Are), and it isn't helped by arriving months after Coraline, which may just be the most accomplished stop-motion feature ever produced. (Incidentally, director Henry Selick also helmed the animated sequences of Life Aquatic.) But the movie is inventive, fun, and marvelous to look at - as well as a welcome return to form for Wes Anderson...which is pretty fantastic.