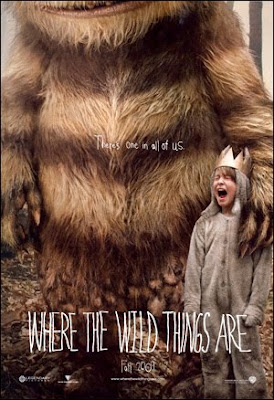 I've generally enjoyed the two movies that I was most looking forward to seeing this year, Watchmen and Where the Wild Things Are, but as the credits for each rolled, I found myself wondering whether they really needed to be adapted from the beloved books on which they're based. It's still hard to believe that either film even got made, and I'm grateful to Warner Bros. that they did, but I can't help thinking of them more as worthy experiments than solid movies. Both were helmed by former music video and commercial directors who treated the material reverentially, and it's probably no coincidence that the stylish trailers for each turned out to be better than the movies themselves.

Nonetheless, both are truly unique pictures, with Wild Things the more deserving of that description. While many childhood staples are routinely, cinematically plundered by movie studios (I'm looking at you, Cat in the Hat), Warners seemed genuinely interested in effectively serving the material of Maurice Sendak's classic children's book, and kept him involved throughout the process. Sendak's choice of Spike Jonze as director—and Jonze's choice of Dave Eggers as co-screenwriter, as well as the Jim Henson Creature Shop as effects providers—all but ensured that this would be no typical kids' film.
The result turns out to be an engaging experience that, like its source material, refuses to talk down to its target audience of elementary school-age children. Wild Things captures the ferocity, imagination, and emotions of Sendak's story, and always feels a little dangerous. When picture-book Max chases his dog around with a fork, it's rascally; when movie Max (in a fantastic performance by newcomer Max Records) does the same in the opening scene, it's a little chaotic and violent.

Not surprising then, that—again, as with the book—some parents have lashed out against the film as being inappropriate for (little) kids. I suspect, though, that more stories exploring childhood's wide range of unpredictable emotions might be just what kids need. I saw Wild Things with my nine-year-old niece, who's probably the perfect age for it, and found it helpful to see the film through her eyes. It made me appreciate that the story of a boy who deals with a turbulent homelife by imagining elaborate worlds can serve as a discussion generator, allowing children to talk through complex feelings. Having said that, I'm not sure it makes for the most entertaining movie.

Some parents may be upset at the film's content, but just as many are bored by it. Which is likely due to the fact that, once Max reaches the island of the Wild Things... not much happens in the way of a plot. The strange story meanders, and is driven by emotions, rather than narrative—in much the same way that real-life make-believe goes. The fantasy segment (the bulk of the movie) is technically brilliant in terms of cinematography, tone, and the Wild Things themselves, but I found myself wanting the character to return to scenes of the real world, which provide strong bookends to the film.

I certainly didn't mind that Wild Things is unconventional, but I wish that it reflected more of the book's fun in the same way that it's able to effectively translate other elements of the story. Still, as an only child who grew up escaping to well-defined realms of make-believe, I felt closely connected to Max, and was emotionally affected by the movie in a rare, powerful way. I won't ruin the last scene, except to say that it's free of dialogue and pitch-perfect.

If Jonze's goal for Where the Wild Things Are was to enhance the book's ability to capture the experience of childhood in a way that isn't patronizing, he nailed it.