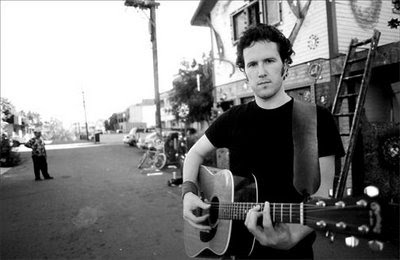 A couple new tunes for you on this Friday afternoon, from two very different artists, whose featured songs navigate somewhat similar thematic terrain.

Entertainment Weekly is streaming Mason Jennings's "The Field" - from the folky singer-songwriter's forthcoming Blood of Man (due September 15) - about a parent whose son goes off to war. Inspired by a desire to introduce his kids to electric guitar, as EW shares, Jennings's new LP is likely to be a bit harder-rocking than his most recent records.
.
"The Field" doesn't exactly shred, but it sounds great, and is evocative of Birds Flying Away, Jennings's first (and best, IMO) full-length, which saw the singer at his most rocking. The song offers a nice fusion of his early-career protest songs and more personal, later material.
Elsewhere, BBC has Radiohead's "Harry Patch (In Memory Of)," about the British WWI vet who recently passed away. Its lyrics - Patch's own words - are the most Radiohead-y thing about the song (apocalyptic imagery abounds), which features only Yorke's vocals over guitarist Jonny Greenwood's lovely string arrangements. It's both pretty and pretty boring, especially for the first studio material we've heard from the band since In Rainbows.
.
"These Are My Twisted Words," another apparent new track of the band's, is more typical Radiohead fare (and unfortunately, for my money, is also pretty boring). Unlike "Harry Patch," the song isn't currently available to download via their website - though you can get it for free at Stereogum - but it may be included on a new EP (reportedly titled Wall of Ice), which the band just might be releasing this Monday. Keep an eye out...

Time for a new post. You've missed a few Fridays.

New posts to commence post-wedding/honeymoon. Sorry. Thanks for reading!

Lies. Wedding and honeymoon are over. I've been listening to the same "new" song for six weeks.