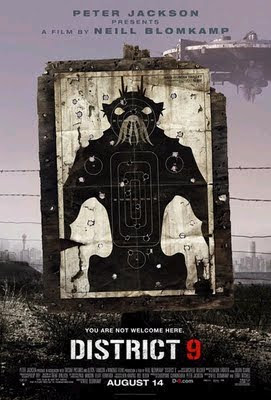 Neil Blomkamp's sleeper hit, District 9, succeeds where other blockbusters have failed this summer by delivering a kind of guerilla filmmaker's Independence Day: it hits all the exciting, intense, and funny beats of a big, sci-fi actioner, but does so through the lens of its wildly original premise and execution.

First time feature director Blomkamp expands on the elaborate world established in his 2005 short, Alive in Joburg, by further developing the story of aliens unexplainably arriving in South Africa, only to be set up in a government-enclosed refugee camp, among the shanty towns of Johannesburg. Naturally, the film's setting lends itself to themes of apartheid and racism - as well as war, and corporate and governmental bureaucracy and brutality - but isn't satisfied to be bogged down as a "message movie, " instead heading in directions you won't expect. While that's probably a good thing, District 9 sometimes goes so many strange ways that the story borders on silly, but nonetheless, is routinely brought back to its captivating, intense premise.

In focusing on the chaos of the slum the creatures inhabit, and the panic that ensues when military contractor MNU's "relocation" plan goes awry, the film calls to mind two of the most effective sci-fi entries in recent memory: Alfonso Cuaron's Children of Men (for its assaultive war zone depictions) and Cloverfield (for its minimalist, handheld approach to monster-fighting), both of which made effective use of their reasonably modest budgets. That District 9 - nearly every scene of which features effects shots, often heavily - doesn't look any cheaper than its summer movie competition, at a fraction of the cost, is a testament to Blomkamp and producer Peter Jackson's ability to do more with less.

For better or for worse (usually, the former), this is a film that takes risks, starting not only with its inversion of the typical "Aliens Attack!" plotline, but with the fact that we don't much like the protagonist, MNU field operative Wikus van der Merwe - or the aliens, for that matter. Like many great science fiction tales, District 9's story is a pretty bleak one, centering on humankind's capacity for inhumanity and self interest - as well as brief glimpses of hope.