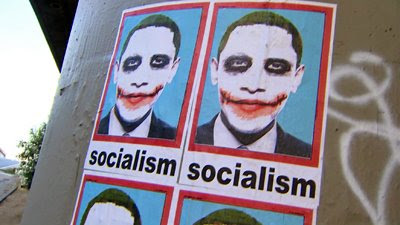 So, apparently, this poster of President Obama in Heath Ledger-Joker makeup started popping up around LA over the weekend, and has subsequently sparked plenty of interest. While not a remnant of some kind of ComicCon shenanigan from a couple weeks back, its creators' line of thinking is pretty transparent: "How can we get our right-wing ideas to go 'viral,' as teh internets kids say? I know! We'll inexplicably attach them to the king of viral marketing campaigns, The Dark Knight!"

Unfortunately for them, I fear their logic may have backfired: when I first saw the image, I just thought, "Hey, neat - Obama as the Joker!" The problem is that people like the Joker - they find him cool. In my mind, associating Obama with the character only enhances the president's "hip" factor. Then, there's the added, general inconherence of the whole thing: so, Obama's a joker, because he's lying to us, or something? He's a "socialist," and thus, like the Joker...who's an anarchist?
Turns out (surprise, surprise), the image was originally Photoshopped by some dude in Chicago who just thought it looked cool. It took the brilliance of these Los Angelino guerillas to add the word "socialism" - in a font that looks nothing like the "hope" text of the Shepard Fairey posters, which I presume they're referencing - and throw them up around the city. And yet, here I go giving them more viral attention, anyway...