Happily, no 70s funk is featured 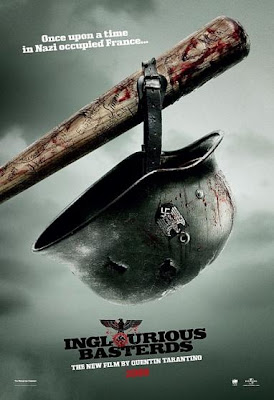 Given Inglourious Basterds's marketing (Brad Pitt-led ragtag crew of misfits goes on wacky, bloody Nazi hunt!), some may be disappointed by the new Quentin Tarantino movie's opening scene: a long, methodical conversation between two people in one room. For the many in the audience who bought tickets simply because it's a Tarantino film, though, it shouldn't be too shocking. Indeed, Basterds is different from what I was hoping for, as well - but I was surprised by how much I enjoyed what it turned out to be.
The film does, in fact, center on what might've happened, had such a cast of characters conspired to take down the Third Reich...but for a war movie, it doesn't feature much war. Instead, the picture plays out as a kind of exercise in tension building, via theatrical one-act-like scenes of backroom deals and espionage.
In that regard, among his body of work, Basterds may most closely resemble Reservoir Dogs, Tarantino's debut (and still my favorite). While the violent atmosphere is inescapable, much of the action takes place offscreen, and arises from characters talking about what has happened and is going to happen. I've heard complaints about just how talky the movie is, but the dialogue is truly a treat, allowing viewers to become enveloped in the unique world of characters the writer-director carefully creates. (If Christopher Waltz - leading a solid ensemble cast - doesn't receive a slew of award nominations for his role as the villainous Col. Hans Landa, it'd be a real shame.)
Of course, not uncharacteristically, this approach can translate a little episodically, but it's enjoyable to watch the story satisfyingly come together, in a way that doesn't suffer the bloat of Tarantino's last few entries. Basterds includes some classically Tarantinian qualities - filmic references, over-the-top monologues, clever editing - but it feels much more free of contrivances than most of his work, as if allowing his typically mile-a-minute style to breathe a bit more. It's his most serious, least trivial, film to date - though, at times, it's also very funny.
Visually striking, as always, Tarantino's revisionist history (which, refreshingly, may be his only pop culture "wink" this go-round) ends up hinging on the power of propaganda, storytelling, and cinema itself, to shape our collective trajectory. Pretty heady stuff for a movie that feels so fun.
Grade: B+