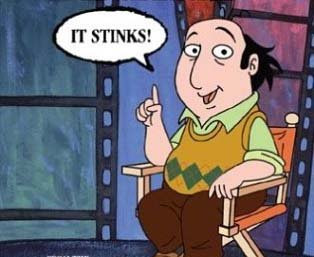 Despite the fact that I'm not a real one, I've always struggled a bit with the idea of "critic" as vocation. However harsh or misguided, there's probably some degree of truth to the accusation often leveled against critics: that, were it not for lack of talent or drive, many professional critics might prefer to be doing whatever it is they're critiquing, rather than making a living off of writing about pieces that others have produced. While that argument discounts the talent and drive needed to write, think, and conceptualize effectively and interestingly, a part of me still has a hard time trashing a piece—regardless of the "greatness" of its art—that people have usually worked hard to produce.

When "contribution to society" (whatever that means) apparently isn't the artists' primary intention behind making something like G-Force, for example, does a snarky takedown hurt? Does it matter whether or not a bad review can deter moviegoers from buying tickets for such blatant product-by-committee? If not, people ask, what exactly does the professional critic contribute to society? The thing is, all critics (and many readers) have to have some level of belief in the idea that, given a certain set of parameters, the critical community is a positive force that helps to shape art and cultural dialogue in meaningful ways. In this age of click-throughs and hits, though, there's an increasing temptation to gain a reputation as an overly-clever smack-talker, when most of us would probably prefer to use culture journalism as a platform for championing and discussing work we're interested in and appreciate.

All of which is why I enjoyed The A.V. Club's recent post on depictions of critics within popular culture, including the expected (Siskel and Ebert imitations abound), the funny (The Muppet Show's Statler and Waldorf), and the bizarre (Bob Balaban in Lady in the Water). But my favorite example given is from Ratatouille, in which the critic character, initially presented as a pretentious stereotype—his name is Anton Ego—is revealed to be much more complex. As The A.V. Club points out, Ego is invested enough in food, the culture he critiques, to put his reputation on the line, defending an unlikely artist whose work reminds Ego of why he became a critic in the first place.

Ego's review, which comes at the film's end, not only changes the trajectory of both his and chef Remy's life and work, but prompts questions about the nature of an artist, and the positive and unexpected ways art can change people. The A.V. Club post's comments are also worth a look, if only to hear from the many readers whose passion for film was stirred by growing up watching Siskel and Ebert thoughtfully debate the cultural merits and impact of art. And isn't that what we want out of a critic?
Posted by John G. Potter at 3:19 PM

What do you mean, you're not a real critic? I think you are.

Thanks, man. I guess I just mean that I'm not paid to critique...