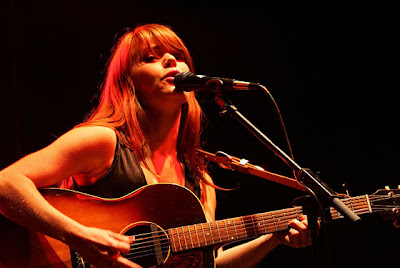 I may not have missed Jenny Lewis's Rilo Kiley bandmates too much when I last saw her play solo, but Friday night at Park West (Toronto's Sadies, who opened, got the crowd revved up with a nice balance of honky tonk and surf-pop), I did find myself missing the Watson Twins - with whom Lewis recorded her debut LP, Rabbit Fur Coat, but ditched for her latest, Acid Tongue. It wasn't that she didn't have a great five-piece band with her - including beau Jonathan Rice and "Farmer" Dave Scher (who also opened) - it's just that I preferred the gospel-country of Rabbit to Acid's bluesier, jazzier leanings.
Still, the new album provided much of the evening's highlights, including "See Fernando," which showed off Scher's considerable pedal steel talent (and which the crew launched into after Lewis began the set with a solo, acoustic version of Rilo Kiley's "Silver Lining"); driving duet "Carpetbaggers," in which Rice stood in for Elvis Costello, who sings on the record; and the barnburning "Jack Killed Mom." And, as she did by going solo with an alt-country album, credit is due to Lewis for trying new things.
Lewis is clearly growing in her musicianship, and was, as always, a great performer Friday, whether placating overly-adoring (how many times can you hear, "I LOVE YOU, JENNY! WOO!" in one night?) fans with sultry glances and smokey vocals, or proving a consummate bandleader, with a command of dynamics, showcasing her meek-to-powerful voice. Even more engaging than the build of "Bad Man's World" (for which Lewis moved to electric piano) to "Jack Killed Mom," was following the latter with the quiet stillness of Acid's "Trying My Best to Love You" and "Happy," off of Rabbit. The Park West, with its great sound and intimacy, proved an ideal venue for Lewis.
The first set was closed with another barnburner, "New Messiah," preceded by the rollicking, new "Just Like Zeus," about "many things," as Lewis introduced it, "Lindsay Lohan and VD among them." The encore opened with "Acid Tongue," followed by another new jam, "Big Wave," which Lewis led on electric guitar and prefaced by saying it reflected, "what's going on right now," and sharing a story about recently visiting the White House.
I was disappointed that there wasn't more from Rabbit Fur Coat (no "Big Guns"?), but the evening closed strongly with the LP's "Born Secular," highlighted by guitarist Danielle Haim's and drummer Barbara Gruska's vocal harmoines and eventual dueling drumming, which they continued after Lewis and the rest of the band had left the stage. Ms. Lewis & Co. put on a fun, engaging evening, and - especially given the new material - I look forward to seeing what comes next.