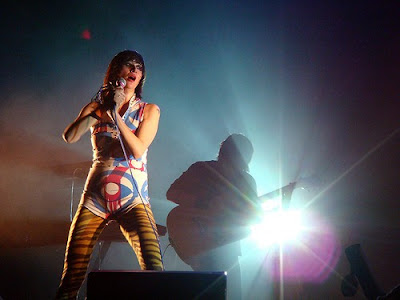 Chicagoans disappointed by the absence of the Yeah Yeah Yeahs at Lollapalooza this summer were treated to news last month that the indie-electro-garage rockers would be opening their US tour at Uptown's Riviera. Demand promptly moved the show to the Aragon, which is a shame, because the ballroom's barn-ish acoustics don't hold a candle to that of the Riv, home to some of my favorite concert experiences in the city (Sigur Ros's () tour and Sleater-Kinney's Woods tour come to mind). Nonethless, Karen O & Co. kicked off the summer in full force last night, with a healthy mix of career-spanning jams.

Showcasing material from their dancey It's Blitz!, the band proved many of the new record's songs to be crowd hits, especially the widely played first single, "Zero," and encore opener/latest single, "Heads Will Roll," for which Karen donned a glowing, pink lucha libre mask. Although nothing from 2007's excellent, hard-rocking Is Is EP made the cut, the setlist relied surprisingly heavily on their comparatively raw, first (and best, IMHO) LP, Fever to Tell. They even followed "Heads" with the jaunty hardcore of "Art Star," - from the group's self-titled debut EP, which brought the Brooklyn trio roaring into the buzz-band limelight - providing a nice balance with the Madonna-friendly (I'm not complaining) new tunes.

By turns thrashy and soaring, there's no question that Nick Zinner commanded the audience with his guitar work, or that drummer Brian Chase was responsible for keeping the sweaty masses moving with his complex, wide-ranging rhythms, but from the second Karen O stepped out from the curtains, the stage was hers. Before the band opened with "Runaway," a giant orb, built into the stage's backdrop, rotated upward, revealing itself to be a giant eyeball (see cover of "Zero" single). The frontwoman posed and strutted in front of the all-seeing eye, spitting geysers of water into the air and releasing cannons of Y-shaped confetti during second song "Black Tongue."

David Pajo of, among others, Zwan and Tortoise, provided supporting guitar and keys, and opened the evening with an inexplicable set of solo Misfits covers. (Edit: Or, not so inexplicable, I guess, considering he has a solo Misfits covers record out). San Diego trio Grand Olde Party followed, winning over plenty of fans. But the crowd was more than ready for the headliners, and ate up anthems "Cheated Hearts" and "Gold Lion," ballad "Maps," and the frenzy of respective set closers "Y Control" and "Date with the Night." They even seemed to dig a cover of the Cramps' "Human Fly." At one point, Karen growled, "The Yeah Yeah Yeahs llllloooooove Chicago!" The feeling was mutual.
Posted by John G. Potter at 3:42 PM