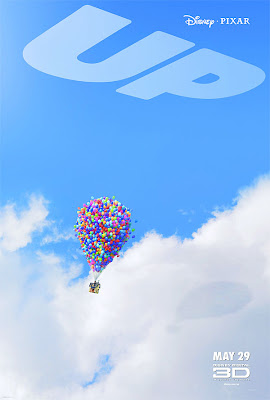 Pixar has become synonymous with quality filmmaking to the extent that I'd go see anything they released. Thus, my interest in Up, the studio's latest, remained high, even when the trailers and premise (a man flies his house around the world) didn't immediately grab me. Unsurprisingly, my trust was well-deserved: Up is outstanding.

Perhaps my original hesitancy was due to the movie's light-on-story-details marketing, which was (again, unsurprisingly) actually a smart promotional maneuver: as with last year's Wall-E, the details of the plot aren't nearly as important as the emotions which propel it. Suffice it to say that director Pete Docter's (Monsters, Inc.) Up is centered around the journey of 78-year-old Carl Fredricksen and the relationships he builds—including an important one with young "wilderness explorer" scout Russell
—along the way.

While most contemporary "family" movie storytelling remains lazy, the Pixar team seems to dare itself to make cartoons about subjects which Disney execs surely initially find inadvisable: foodies, dialogue-free robots, and now, the elderly. Many movies might introduce the curmudgeonly Carl as a cranky, older person and leave it at that, but we meet him in Up by way of a beautiful opening sequence
— similar territory was explored, though not as effectively, in Toy Story 2—which proves that this studio's filmmakers have a unique ability to effectively capture the human experience. Pixar may traffic in grand stories and ideas, but it's the little touches of character behavior and background details that allow for audience connection—a sentiment echoed in Up's message.

As with many Pixar and Disney (and other great) stories, this is an adventure tale about finding meaning in life. If Wall-E was about love and purpose, Up is ultimately about loneliness and, convergently, fulfillment. It's exciting and fun, inventive and funny.

[Note: The movie is presented in 3D, and though there may not appear to be much by way of obvious effects, the viewer comes to realizes the device is just another tool the filmmakers use for advancing the story, rather than the other way around; it's essentially subtle 3D, which seems almost oxymoronic, but also makes complete sense. (Hear more about it on Docter's fascinating interview from NPR's Fresh Air last week.)]

Glad to read you liked Up, too. I'd like to go see it. Last night, unfortunately, I let Josiah and our friend Wendy convince me to go see Terminator Salvation. At least I got to eat a lot of popcorn. Horrible, delicious, horrible popcorn.

I think you'd like it. I've heard Terminator's not great...planning on Netflixing that one.