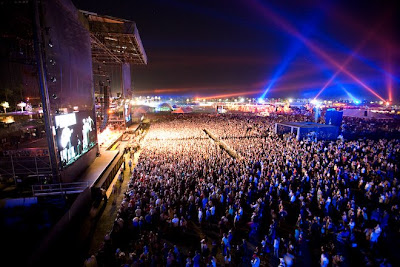 March 20 has come and gone, and - despite the snowfall in Chicago last weekend - spring has has totally sprung, all y'all film & music enthusiasts! You know that means: festival lineups...sweet, expensive, usually far away, festival lineups!

I know I'm not alone in associating warmer weather with excitement for outdoor summer concerts, so let me break down this year's festivals:
Lollapalooza has founder Perry Farrell's reunited Jane's Addiction (touring throughout summer with Nine Inch Nails), Beastie Boys, Depeche Mode, and Tool. 90s-tastic, as Lolla should be, with the Killers and Kings of Leon thrown in there, for good measure. I'll take any chance to see the Beasties, and I'd watch Tool, but I think I might be too born-in-the-80s to get superpumped. Dear Perry: it'd be sweet if last year's headliners, Radiohead and Kanye, could return. K thx bye.
The cheaper ($35/one-day pass), hipper Pitchfork scored big with headliners Flaming Lips, and Yo La Tengo, Built to Spill, and Tortoise fill out the indie-legend bill nicely. Also, the National and Grizzly Bear for those into "new" bands. For Chicagoans, Pitchfork is probably the most bang for your buck. Count me in...at least, for a day pass.
As always, Sasquatch holds down Pacific Northwest crunchy hipness, with the Decemberists, Fleet Foxes, Animal Collective, Ben Harper, and Bon Iver - plus, some Mos Def and and Santogold, to spice things up. Evergreen State residents, I envy thee.
Both California's Coachella and Tennessee's Bonnaroo maintain the gold standard with a solid mix of decades-spanning icons (Paul McCartney, Leonard Cohen, Morrissey, The Cure; Bruce Springsteen, Elvis Costello, David Byrne, Public Enemy, respectively) and in-demand contemporary sets: Coachella can brag about getting M.I.A. (replacing Amy Winehouse, who backed out - go figure) in her first performance since having a kid, plus the Yeah Yeah Yeahs, and Bonnaroo boasts Wilco and MGMT.
So, who rocks hardest (and by "hardest," I mean, "has put together the most eclectic and exciting roster of veteran performers")? See you on the gross lawn!

I will be at pitchfork with ya baby!