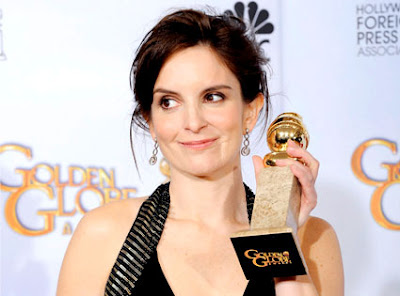 Any ceremony in which Heath Ledger, Wall-E, Bruce Springsteen, Tina Fey, Alec Baldwin, and 30 Rock all walk away with awards is OK by me. Still, the 66th Annual Golden Globes show itself was expectedly, painfully awkward - with some bright spots, nonetheless.
Standouts included:
-The presentation of the Cecil B. DeMille award to Steven Spielberg
-Surprise respective Best Picture wins for Slumdog Millionaire and Vicky Cristina Barcelona
-Kate Winselt receiving both Best Actress and Best Supporting Actress
-Wrestler director Darren Arnofsky flicking off Best Actor winner Mickey Rourke during the ladder's acceptance speech (which included two utterances of the word "balls")
-Fey's acceptance speech (which included three utterances of the phrase "suck it")
-Tracy Morgan's acceptance speech on the behalf of 30 Rock ("Tina Fey and I had an agreement that if Barack Obama won, I would speak for the show from now on. Welcome to post-racial America! I am the face of post-racial America! Deal with it, Cate Blanchett.")
Bring on Ledger's Oscar nom...

The Curly Haired girl from the Midwest said...

Mickey Rourke's acceptance speech stressed me out. The whole time I kept waiting for him to say something horrible! Instead I got a nice tribute to his dogs

Have you seen The Wrestler yet? Its pretty great...

Yeah, I felt pretty tense throughout the whole thing. I hate live stuff like that. But Mickey Rourke is pretty awesome.

And I haven't seen Wrestler yet, but it looks good. Will have to check it out...