Get Behind Me, Santa 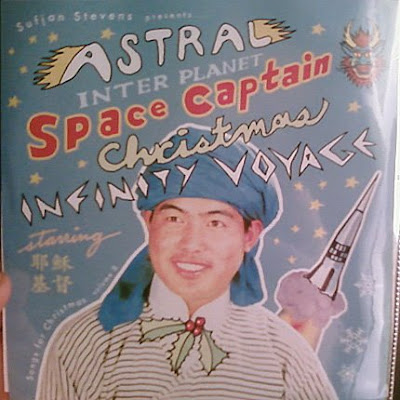 Those who've been wondering what everyone's favorite banjo-totin' state history connoisseur, Sufjan Stevens, has been up to lately got an answer last week when his latest Songs for Christmas EP started floating around the internets.

The new record, called - in typically ornate-cum-silly Sufjan extravagance - Astral Inter Planet Space Captain Christmas Infinity Voyage, is apparently volume eight in his nearly annual series, meaning that my reporting last year of the dearth of an '07 Stevens holiday EP was inaccurate. (It also means someone's math comes off a little fishy, since volume five was released in '06...did volumes six and seven surface last year? Anyone got 'em?)

Anyway, it appears Suf has taken a page from Kanye, and employed all manner of electronic weirdness for the new EP - to the extent that, initially, I thought the thing might be a fake. But give it a listen-through, and it's clearly the real deal, harkening back a bit, perhaps, to the Enjoy Your Rabbit period. But it's also no coincidence that the disc's two originals ("Christmas in the Room" and "The Child with the Star on His Head") are its only non-electronic tunes, and happen to be its strongest.

Similarly, another new holiday EP, Christmas with Weezer, reveals a band in top form by sticking with what they do best. Surprisingly, a bunch of traditional Christmas songs have produced the most Weezer-sounding tracks the band's made in years. Although, I guess, both old school Weez and holiday classics are all about strong melodies, so maybe it makes perfect sense.

In any case, hooray for more yuletide jams. God bless us, every one!
Posted by John G. Potter at 12:26 PM