George Lucas: the Force is strong with Obama 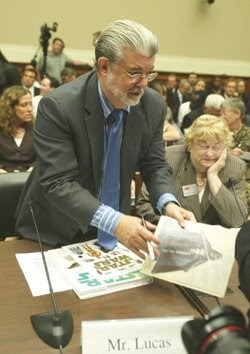 Slash Film tells us George Lucas was on Capitol Hill this week to testify before the House Subcommittee on Telecommunications and the Internet, offering his support for the Universal Service Fund. Lucas advocated for free broadband in schools and libraries, allowing for the creation of an education-exclusive "third Internet." Then, Beltway hilarity ensued:

Rep. Mike Doyle: “The universal service fund needs to be blown up like the Death Star.”

Rep. Lee Terry: “Rick Boucher and I are the Luke Skywalkers riding in to save the universal service fund by those who want to destroy it, the Darth Vaders.”

Chairman Edward Markey: “The e-rate became law when Congress enacted it as part of the Telecom Act, and we’ve defended it with political light sabers ever since.”

Nothing like coming before our noble governing body with new ideas and passion, and being patronizingly met with references to the sci-fi movies you've made. Lucas did, however, claim it's "reasonably obvious" that Barack Obama is a Jedi Knight...