In other words, it's slightly better than "Fantastic 4" 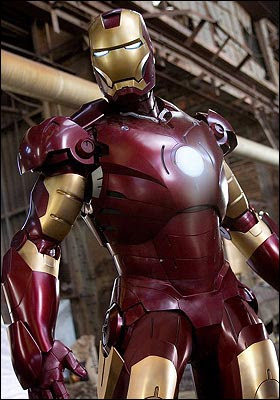 From its funny, intense opening scenes on, 2008's first official blockbuster doesn't let up. Slick and exciting, Iron Man has all the awesome stuff one expects from a summer action movie, but, like Batman Begins and the first two Spider-Man entries, the solid cast and witty script (penned, in part, by Children of Men scribes Mark Fergus and Hawk Ostby) elevate it to a higher level.

The commonality of those successful superhero pictures may just be the backgrounds of their directors: like Batman Begins's Christopher Nolan and Spider-Man's Sam Raimi, Iron Man's Jon Favreau got his start in independent film, writing Swingers and Made; the latter, his directorial debut. The movie looks great (Favreau's lack of reliance on CGI, in favor of a more organic feel, pays off), but excels because of the strength of its story and emphasis on character development.

Iron Man has taken a second-tier Marvel hero who could've seemed dated (in the comics, Iron Man fought Communists), and brought the story into a gritty, post-9/11 political landscape. Robert Downey, Jr. is a thrill to watch as billionaire industrialist Tony Stark, who, after being kidnapped by terrorists using his own weapons against him, transforms from a morally ambiguous, war profiteering playboy into the Man in Metal. Once free, Stark reevaluates his priorities, and begins work on a "new project."

The suit (designed by Stan Winston), which Stark upgrades through a series of fun test drives, is fantastic in each of its iterations. And Iron Man's revelation scene is as cool as Batman's debut in either Begins or Tim Burton's Batman, which is saying something. Unlike countless other comic book movies, the origin story doesn't limit the potential of the likely franchise's first entry, but rather serves as an opportunity to offer a unique take on the classic redemption tale...with, y'know, a lot of ass-kicking.

i saw iron man this weekend and really liked this review john! I feel like it's something you would definitely read someplace published.
except i think you need a whole nother paragraph about how. bad ass. robert downey jr. is.
chick question: did you like gwyneth in the damsel role? she bothered me at the beginning but i guess got a little better.

Thanks! I actually wrote "Robert Downey, Jr. = badass" in my notes. He was awesome.

Gwyneth was a little damsel-y for my taste, at times, but I didn't really think it was her fault. They actually developed Pepper into a much richer character than the comics, and I thought (like the rest of the cast) she brought some gravitas to it.

The Hulk = "reasonably entertaining" according to USA Today.
But I hear there is a Robert Downey Jr appearance!
I hope that's not a bad spoiler.