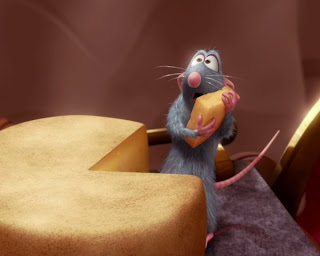 In celebration, here's an interesting CNN story about how, despite the fact that it's widely seen as the best-reviewed movie of the year, Ratatouille was shut out of the Academy Awards' Best Picture category—not to mention many of the same critics' top ten lists— thanks, in part, to the Best Animated Film category, created five years ago.

While it's nice that Oscar is recognizing animated features at all, the field effectively corners cartoons into the kids' table, perhaps preventing them from competing in bigger categories. The only animated film to be nominated for Best Picture was 1991's Beauty and the Beast, which many feel Ratatouille at least matches, if not surpasses, in quality. If the "Best Animated" category had existed in the '90s, goes the argument, Beauty almost certainly wouldn't have been up for Best Picture. (Incidentally, while Ratatouille and Persepolis were rightly nominated as best animated pictures, the other contender is Surf's Up. Seriously, Academy? That's better than The Simpsons Movie?)

It's also probably safe to assume that the fact that Ratatouille is essentially a G-rated family comedy prevents it from being considered as "important" as other, more dramatic —but lesser—movies. After all, it's just a cartoon, right? More on that tomorrow, though...
Posted by John G. Potter at 8:52 PM

Yup. And telling that the foreign film category does not have the same degree of a ghetto-izing effect--opposite ends of the auto-prestige spectrum, I suppose.

But where were you with your criticism when Monsters, Inc was snubbed in 2002? (Oh, right, you were still a youngster...) Best Pixar film ever.

Yeah, the Oscars are pretty much a joke - or, at least, meaningless, to me.

Have to disagree about Monsters, Inc. - I think Ratatouille and The Incredibles are leaps and bounds ahead of other Pixar stuff.