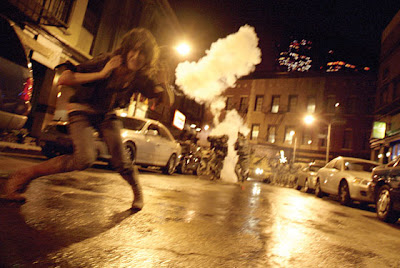 Well, after months of obsessive online speculation, 1-18-08 finally arrived this weekend, and with it came Cloverfield. Turns out all the viral marketing background setup - aside from possibly filling in some story gaps for viewers who've been following it closely - doesn't even come into play in the movie, as many expected. And the film is stronger for it.

The ingenious device of the picture is that the audience witnesses a Godzilla-like attack on New York through the camcorder lens of its protagonists, and experiences it as they do, with no explanation or idea of what's happening. The premise is obviously indebted to a fellow guerilla-style hit, The Blair Witch Project, but Cloverfield is a reinvention of the genre, and its framing heightens the panic and chaos required of such a story to truly make you feel like you're there.

The result is a kind of minimalist blockbuster, which, with its slight $30 million budget, relies heavily on sound and dizzying scene setups to create its constant, heart-pounding intensity (it has aptly been described as more theme park than movie).

Still, it's a bit cheesy at times, and the creature creepiness - which we do, in fact, see, if not much - looks a little SciFi Channel-CGI to be satisfying after all the hype (but, really, what could've met all those expectations?). The story is great, though, because the monster is really secondary; Cloverfield is about a group of friends struggling to make sense of a situation beyond their understanding or control. And it's one exciting ride.