And on to the Oscar contenders...(Part 4) 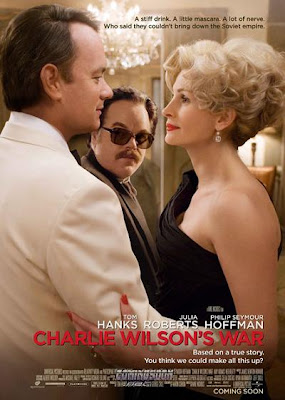 Can a movie starring America's Sweethearts (Tom Hanks and Julia Roberts in their first on-screen pairing) with fellow Academy Award winner Philip Seymour Hoffman, written by Aaron Sorkin (The West Wing) and directed by Mike Nichols (The Graduate) - released in Oscar-baiting December - be considered a sleeper? For me, Charlie Wilson's War was just that.

Those expecting a sweeping wartime drama, or even a snappy, romantic comedy, have been dissapointed by Charlie Wilson. It has not been a box office smash. Critics, while mostly positive, have qualified their praise. But where other war-and-politics pictures might shoot for the epic, this one resides mostly in intimate backroom discussions.
Hanks's charismatic take on the philandering, larger-than-life US Rep. Charlie Wilson (D-TX/2) and his nearly single-handed efforts to fund the covert Afghani war against the Soviets is the best thing he's done in years. The same could be said for Sorkin, whose walk-and-talk dialogue pops in the back-and-forths of Hanks and Hoffman, who take to it well. Hoffman, as CIA agent Gust Avrakotos, is outstanding as the film's unlikely moral center, and has a great opening scene. Roberts - whose over the top accent, hair, and makeup make her (unintentionally?) come off like a southern drag queen - is Joanne Herring, "the sixth richest woman in Texas," who guided Wilson to the right people on his quest.

Charlie Wilson effectively balances humor with poignancy, and just as everyone is championing the once-obscure congressman's cause (hundreds of millions of dollars and dozens of downed Soviet helicopters later), the same people return to ignoring him when he begins talk of rebuilding post-war Afghan society. The original ending of Sorkin's script, somewhat famously, had Wilson watching smoke billow from the Pentagon on September 11, 2001. The picture didn't need it, as the implications hang heavily over its third act. "Sooner or later, God's gonna be on both sides," warns Wilson while a fellow congressman riles up a crowd of Afghanis in a refugee camp.

Charlie Wilson's War is a story of flawed people trying for great things, and the way the story is told snuck up and left me surprisingly stirred.

I saw the trailer for this and got quite excited about seeing it.

Sadly though, I think any film with geopolitical relations as its core subject matter faces a tough sell in a culture where 'cool' is post-political cynicism.

You should definitely check it out.