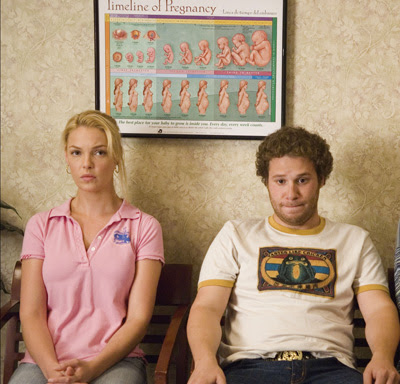 Katherine Heigl recently shared with Vanity Fair that she felt the year's biggest comedy hit, Knocked Up, in which she starred, was "a little sexist." She goes on:

"It paints the women as shrews, as humorless and uptight, and it paints the men as lovable, goofy, fun-loving guys. It exaggerated the characters, and I had a hard time with it, on some days. I’m playing such a bitch; why is she being such a killjoy? Why is this how you’re portraying women? Ninety-eight percent of the time it was an amazing experience, but it was hard for me to love the movie."

Now, 1.) I liked Knocked Up a lot; 2.) I'm certainly aware of the fact that as a straight, white male, I'm catered to in all kinds of ways — movies being but one small example — and I may certainly miss things that others don't; 3.) Knocked Up was made, mostly, by men — men who may have also missed things in their own film that others didn't; 4.) I haven't seen the film since it came out, and could benefit from another viewing with this idea in mind.

But I take issue with what she said. One of the reasons that I found Knocked Up so compelling was that it didn't pander to the audience by playing into our expectations. I didn't think Heigl's Alison was a "bitch" — like the leads of director Judd Apatow's last surprise hit comedy, The 40-Year-Old Virgin, she is a complex character who defies easy, one-note characterization.

Similarly, co-star Seth Rogen's Ben did not go from a simple point A to point B, as has been played out so often in other look-this-person-realized-something-important stories. Even though he and Paul Rudd's Pete are funny, goofy guys, they're also the butt of the movie's jokes. We identify more closely with the stable Alison, as she is faced with a number of difficult decisions throughout the story.

I should point out, though, that this is not the first such accusation leveled against the movie. Fellow brilliant comedy writer-director Mike White (School of Rock, Year of the Dog), who worked with Apatow on NBC's cultishly revered Freaks and Geeks, told the New York Times:

"I definitely stand in the corner of wanting to give voice to the bullied, and not the bully. Here's where comedy is catharsis for people who are picked on. There's a strain in Knocked Up where you sort of feel like something’s changed a little bit. My sense of it is that because those guys are idiosyncratic-looking, their perception is that they're still the underdogs. But there is something about the spirit of the thing, that comes under the guise of comedy, where — it's weird. At some point it starts feeling like comedy of the bullies, rather than the bullied."

I take some issue with this, too, but for some reason, the words of White (who is bisexual), hit home a little harder for me — maybe, as mentioned, because his criticism is from a male's perspective, and the most immediate level on which I saw the movie was, obviously, on a male one.

Anyway, the combination of the two criticisms — and I'm sure there are plenty of others who share similar perspectives — are certainly enough to make me watch Knocked Up again, a little more closely. Thoughts? I'm particularly interested in hearing from women on the subject.
Posted by John G. Potter at 4:07 PM

Haven't seen Knocked Up, mainly because I saw Superbad and wasn't very impressed. Although I think it definitely had its moments of dead-on wit I agree with what Mike White commented on, there was a certain undertone that made me somewhat uncomfortable but that I couldn't quite put my finger on. After talking with friends who loved the movie and didn't agree with my take on it, I think I've figured out what bothered me: The self-deprecating nature of the lead male characters make it difficult to argue this movie has overt sexism, but that doesn't mean its not there! Women are represented in the typical madonna/whore role, where the "best" female character remains virginal and the rest proffer sex to anyone who wants them. I would love to see a female character who can own her sexuality, who can enjoy sex when and where SHE wants it. This is the type of woman who is sadly underrepresented in Hollywood. This type of woman desperately needs to be seen by young girls who are all too often sexualized before they ever feel a desire for sex. I agree this is a lofty goal for comedies catered toward adolescent boys, but a girls gotta dream...

Very interesting insight - thanks for sharing.

I thought Knocked Up was a much stronger movie than Superbad, and I have to say that I think Alison (the film's lead) does, at least in part, fit the bill of what you describe as a more complex female character. Still, I certainly see Heigl's (and your) argument.

while i love apatow's work, i do see where the recent criticism of "knocked up" and, more recently, "forgetting sarah marshall", is coming from. as a woman, i would like to see some female characters that are a bit more developed. after all, this is the man that created Lindsay Weir, one of the best female characters in a television series ever. in "freaks and geeks", lindsay was allowed to make mistakes, get uptight, get "drunk," get high, (even though she ended up hating it) break up with a boy she didn't like enough, and eventually follow her own path. where's the film version of lindsay, judd?