The H is O: The Hobbit is On 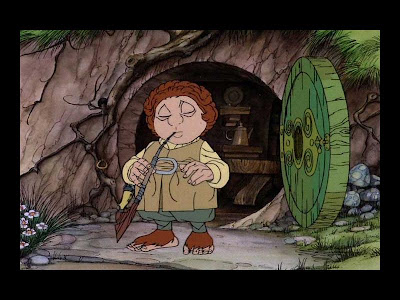 Remember a few years ago, when Lord of the Rings was dominating everything with its awesomeness, but then the movies stopped coming out every Christmas, and a lot of people were like, "What? No more Lord of the Rings? I hate you, Peter Jackson - make The Hobbit now!" and a lot of other people, like me, were all, "I don't know, I'm not sure if that's such a good idea"?
And then, there was a really long, increasingly bitter, legal battle between New Line and Peter Jackson over royalties, and Jackson was like, "Maybe I won't make your little Hobbit movie after all, how 'bout that?" and New Line was all, "Fine, we don't care, we'll get Sam Raimi to do it," and Raimi was like, "Maybe, I guess, I just made Spider-Man 3, which sucked," and everyone went, "No! Peter Jackson has to do it!" and New Line was like, "We don't have that much time, our rights to Hobbit are almost gone - give that Jackson guy more money!"?
Remember?
Well, now, apparently, it's definitely happening, although Jackson is just serving as executive producer, which was long-rumored...but wasn't the bulk of the dispute over the fact that LOTR was Jackson's vision, and everyone wanted him to direct it? It was hard for me to be convinced there was much of a point to this even when Jackson was going to direct, but now - combined with the fact that they're definitely filming it as a two-parter - it seems even more like merely another opportunity to make money off Tolkien's name.
But, then again, when I first heard LOTR was being made into a movie, I thought they should've started with The Hobbit first, so what do I know? Maybe it'll be amazing. No word yet on a director, or whether any Leonard Nimoy songs will be featured.
Posted by John G. Potter at 12:55 PM