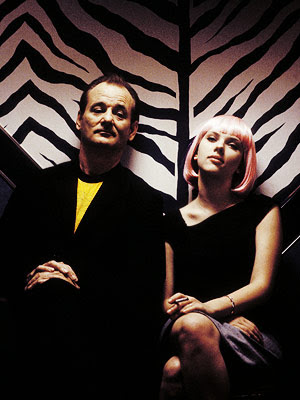 So, like a lot of people, I think Lost in Translation is a great movie, and much of that greatness comes from its subtleties - the things left unsaid and the lack of a pat, Hollywood ending for a story mostly about longing and connecting.

That being said, aren't you a little curious about what Bill Murray actually whispers to Scarlett Johansson at the film's close? Sure, I love that the audience doesn't need to - and isn't supposed to - know what the dialogue is, but thanks to Rotten Tomatoes, Slashfilm, and a YouTube user with some fancy digital processing, we can get right up in the characters' intimacy.
(Spoiler: The line is a nice one, and would've been fine in the movie, but we still feel more shorthanded by hearing it than imagining it).
Posted by John G. Potter at 3:30 PM