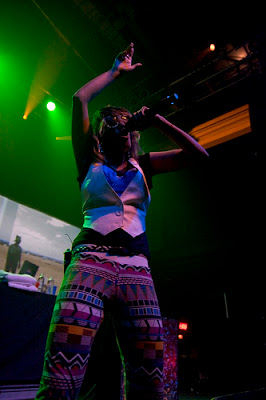 Things kicked off full on, revolutionary style last night for Sri Lankan-British M.I.A.'s stop in the District. Before the electronica-infused MC (ne. Maya Arulpragasam) made an entrance in all her spandexy glory, a video of ultra-leftwing activist turned Tokyo gubernatorial candidate, Koichi Toyama, played across huge screens lining the stage. "This nation must be destoryed!" read the subtitles, as Toyama shouted in a campaign speech. "If you think you can change something by voting, you are COMPLETELY wrong," he said, middle finger raised, as the speakers' bass buzz grew boomingly loud. "That guy's in jail now," Arulpragasam told the sold-out 9:30 Club crowd as they screamed upon her arrival. Thus began the evening's audio-visual assault.

I'm not complaining. Just listening to her excellent records, 2005's Arular and this year's Kala, is enough to overwhelm you - as much to take action on justice issues as to shake your moneymaker (Rolling Stone's Rob Sheffield aptly described her music as "the sound of jump rope rhymes in a war zone"). One would expect the live show to meet that challenge. After Baltimore's DJ Blaqstarr and Chicago's Cool Kids (think Neptunes meet Beastie Boys) hyped the crowd, Arulpragasam - decked out in a crazy costume, naturally - got everyone moving with Bollywood sample-laced opener "Bamboo Banga."
Regularly stage-diving and inviting others up front (during "Bird Flu," she brought up dozens of audience ladies onsatge), Arulpragasam's considerable charisma and insane beats were on full display. Taking advantage of her visit to Washington, she even graciously took the time to thank the F.B.I. and C.I.A. "I probably won't be allowed back in the country until you have another president," she said of her soon-expiring Visa. In front of an always-colorful backdrop of what looked like video games, African documentary footage, and music videos, she and right-hand-woman Cherry led the sweaty masses in fist-pumpers like "World Town" and "Pull Up The People," before giving the chance for another Baltimore native, MC Rye Rye, to spit onstage for a bit.
But the party seemed to hit its peak just before 2 am, post-set and pre-encore, as the audience joined together in spontaneously singing the "Ya ya hey!" refrain of M.I.A.'s breakout hit, "Galang." When she again took the stage for the first of three encore songs, the Clash's "Straight to Hell"-based "Paper Planes," everyone seemed to be feeling the love. "DC! I love all of you," said Arulpragasam as she walked off after closer "URAQT." "Good luck with your election."
Posted by John G. Potter at 3:08 PM