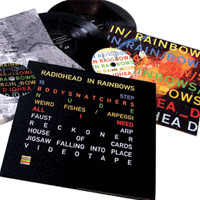 In a move some are quick to call a revolutionizing of the music industry (and as mentioned last week), Radiohead’s seventh LP, In Rainbows, was made available to download from their website today, sans record label, for a price the listener sets. Nine Inch Nails have followed suit, and others are reportedly close behind. But how does it actually sound? As if there were much of a question, fans can relax, as the album is excellent.

With lots of echo-y vocals, compelling melodies, and big builds to string-enhanced finishes, more than anything, In Rainbows is pretty. Pretty…but creepy – a fairly standard Radiohead description. Whether or not you’re happy with their progression from melody-driven noisy guitars to more stark, electronic terrain, the band’s musical path has had a clear trajectory, and both In Rainbows and their last LP, 2003's Hail to the Thief, feel like a culmination of all the sounds they’ve experimented with.

The record opens strong with the percussive, “Idioteque”esque beats of “15 Step,” which incorporates its slinky guitars and bass with shouting children. Danceable album standout “Bodysnatchers” is next, and with its wailing background vocals and crunchy guitar buildup into a feedback explosion, the song would feel equally at home on OK Computer or The Bends. From there on out, In Rainbows is generally more subdued, and although it all sounds great, a couple more rockers would’ve been welcome (maybe we’ll have to wait for the 8 bonus tracks accompanying the album’s December release in “discbox” form).

As Rolling Stone points out in their album preview, the band played the slow, funky “Nude” regularly on their OK Computer tour, and it shows: its eerie sampled choir and sense of foreboding (“You’ll go to hell /for what your dirty mind /is thinking”) recall “Karma Police.”

In Rainbows also has a strong finish, with the head-nodder “Jigsaw Falling into Place” leading into closer “Videotape,” a sad and beautiful piano ballad with just enough weird percussion to keep it sinister.

With their new set of songs, Radiohead retain their status as one of the Very Best Bands in the World by both staying solidly rooted in the sound they know they do well and continually being unafraid to explore new territory.

In Rainbows will be released to stores in traditional CD from in early 2008.