Not exactly about movies... 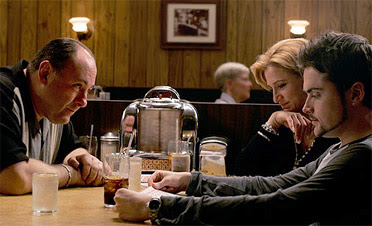 ...but since The Sopranos was certainly cinematic in its scope, it's worth turning your attention to Entertainment Weekly's fascinating excerpt from the forthcoming The Sopranos: The Complete Book by Brett Martin. In it, series creator David Chase opens up about the finale's controversial ending just enough to make you even more perplexed.
I fell pretty solidly in the "This ending, while frustrating, brilliantly compliments the show's eight year run by continuing to not spell anything out for the viewer" camp. But the series always walked a tricky line...the reason people loved it was that it didn't patronize its audience; still, Chase shouldn't be so surprised when fans agonize over the show's every little detail. When the dots aren't connected - if there even were dots to connect - everything starts to look like a puzzle. And his ruminations ("Here are some hints -- oh, wait, nevermind - I'm not talking about hints") don't help. But it sure keeps plot analysis fun, doesn't it?
Incidentally, can you imagine the uproar if he would've gotten his way and held the blackout without any credits?
Posted by John G. Potter at 12:29 PM