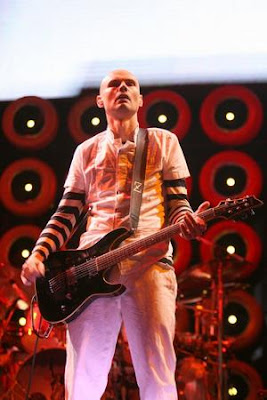 As if there were ever any doubt about it, Billy Corgan made it clear Friday night that, at least in his mind, he is the Smashing Pumpkins. "Thanks for listening to my songs," he told the sold out Tower Theater during the first of four shows in Philadelphia. For a solid two hours, the newly reunited Pumpkins - consisting of Corgan, Jimmy Chamberlin (whom Corgan introduced as his "life partner") and three studio players (Jeff Schroeder, Ginger Reyes and Lisa Harriton) - alternated between rocking hit after hit and indulging in long, experimental jams...neither of which should come as a surprise to fans.

Everything sounded and looked (killer light show) great, even if the audience was clearly waiting for the songs they knew so well. And why wouldn't they? Given their dominance of "alternative rock" throughout pretty much the entirety of the '90s, Corgan & Co. have an arsenal of popular songs, and they certainly delivered the goods. From the pop bombast of "Tonight, Tonight" and "Disarm" to the metal frenzy of "Today," "Zero," and "Bullet with Butterfly Wings," the band was tight, and their sound benefited from the bigness of the theater tour production they perfected with this summer's festival circuit. But, almost as if he can't help himself, Corgan seems to say, "You want to hear my hits? Well, you'll also have to endure my craziness."

There's the rub of the Genius. The same creative force that birthed two of the '90s greatest albums wound up releasing 2005's TheFutureEmbrace, Corgan's decent if overindulgent and pretensious solo LP. As a cynic might see things, when Embrace sold only about 70,000 copies, and Corgan/Chamberlin's new project, Zwan, fizzled, Corgan decided he wanted people to like him again, and is now enjoying both the glory of playing songs people love to massive crowds, and the rock star satisfaction of doing what he wants because he can. Those who might've tried to harness or focus that genius (former Pumpkins James Iha and D'arcy Wretzky, or even temporary Pumpkin Melissa Auf der Mar, some might argue) are out of the picture, and Billy's ego is free to reign.

Still, does it really matter? Sure, Corgan and Chamberlin exclusively performed all the instruments on Zeitgeist, this year's Pumpkins comeback record, but, as everyone knows, that was the case for most of the band's albums, anyway. And on Friday night, they sounded as great as ever. So, if it's Corgan's show, let him have it. Aside from the years of shifts in band personnel since their tumultous Infinite Sadness tour in 1996, it's not entirely clear why every album following Mellen Collie has been half-great and half-mediocre, but Corgan seems pretty aware of what's great, and highlighted those songs Friday.

Chamberlin's monster drumming powers are at an all-time high, and when performing encore opener "Cherub Rock" or Zeitgeist's powerful, ten minute freakout "United States," it was evident that he's truly a force to be reckoned with. Corgan remains an excellent guitar player, as displayed in many solos, including an irony-free, different-from-Hendrix's (still, who has the balls to do that? oh, right - Billy Corgan) "Star-Spangled Banner." Other seemingly unironic moves included closing the first encore with a singalong of "I Love Rock N' Roll," though it should be pointed out that it was the Smashing Pumpkins-focused episode of The Simpsons which answered the question, "Are you being sarcastic, dude?" with, "I don't even know anymore," so who's to say?

For every inexplicable, meandering hybrid of "Heavy Metal Machine" and Jefferson Airplane's "White Rabbit," there were nice surprises, like an acoustic set - including a lovely "1979," performed solo by Corgan - or some lighthearted, goofy banter, like a rambly song dedication to the Phillies by the Cubs freak himself. And after two hours and two encores, Corgan alone lingered on stage, greeting fans who had rushed to the front. He seemed genuninely happy, as did everyone else…and isn't that what it's all about?
Posted by John G. Potter at 3:01 PM

I wonder if the 2 encores were for entertaining the fans or himself? it seemed a bit excessive...

If you're not in the mood for a second encore, isn't it considered acceptable to head out?

I know I, at least, was making as much noise as humanly possible to call for that second encore.

I really enjoyed this review, and appreciate the balanced perspective of someone who can be very ambivalent about Corgan's more recent musical endeavors but still appreciate what he does.

I had relatively low expectations coming into this concert... I'd never been to a Pumpkins show and the many live recordings I'd heard could be as awful as they could be amazing. And three of the long songs they played involved songs I didn't like at all (One from Zeitgeist, Heavy Metal Machines, and Glass And The Ghost Children) but that Corgan totally sold me on in the concert. The performance and the context really transformed especially Heavy Metal Machines.

I was grateful to see Corgan so willing to perform focused, fantastic versions of the songs I loved. I was also very grateful to hear the lingering, orchestral, sprawling experimentation that he did... reminded me of the best moments in Drown and Starla.

I'm still worried about whether or not I can enjoy what Corgan wants to write these days, but I'm very happy I ended up seeing this concert.

Can't say I agree about "Heavy Metal Machine," but I did think it was a great show. You should give Zeitgeist a chance, if you haven't checked it out much. There's some good stuff.