Clooney schools us in corporate responsibility 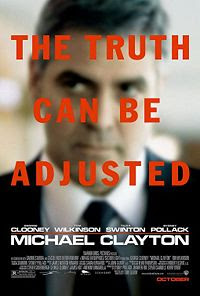 Questioning without being overly preachy, Michael Clayton is at its best when it offers no easy answers. Shot with a close intensity by screenwriter/first-time director Tony Gilrory (who also penned the Bourne series), Clayton, as does Bourne, excels in a tired genre by painting with shades of grey.

George Clooney, like the rest of the cast, gives a strong performance as the title character, a "problem fixer" at a major law firm whose star attorney, Arthur Edens (an incendiary Tom Wilkinson) may or may not be going insane. Having had a spiritual awakening brought upon by the questionable morals of one of his clients, agrochemical conglomerate U/North, Edens eccentrically leads Clayton down the rabbit hole to the truth behind the class-action lawsuit against the corporation.
Gilroy has a gift for rich dialogue and tense pacing, and effectively gives the story an ominous, quiet mood. But the ending, while satisfying, feels a little too pat for a film which, until then, has thrived on its subtlety.
Michael Clayton opens in wide release tomorrow.
Grade: B+
Posted by John G. Potter at 4:06 PM