Not on our watch 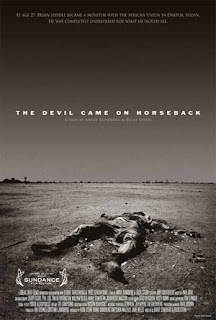 Annie Sundberg and Ricki Stern's powerful documentary on Marine Captain Brian Steidle's experiences in Sudan, The Devil Came on Horseback, may have ended its week-long run at DC's Avalon Theatre Thursday, but it will be touring independent moviehouses across the country this fall.
Adapted from his book of the same name, Devil follows Steidle's time in Darfur as an unarmed military observer with the African Union and subsequent return to the US to raise awareness about the ongoing genocide in the region. Empowered by his firsthand testimony and vast array of photographs documenting the atrocities, the viewer shares both Steidle's frustration at one's seeming inability to do anything about the situation, and optimism that, with the help of his and others' accounts, people will demand more attention be paid to the issue.
After winning several awards and standing ovations on the festival circuit, the doc began its theatrical run last month. Go to thedevilcameonhorseback.com for screening info and to learn more. Another documentary, Darfur Now, featuring Don Cheadle and George Clooney, debuted last week at the Toronto International Film Festival, and opens November 2nd.
Posted by John G. Potter at 2:57 PM